Skip to content
Previous Next
A Visit to Rondine 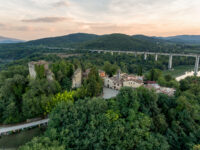 A Visit to Rondine

Gretchen and I spent last week with Rondine, Cittadella della Pace in Arezzo and Rome, Italy. We went to learn more about how they help young people overcome the traumatic impact of intractable conflict and to give a talk at their annual report to the Italian Senate.

I knew we were going to be blown away by the World School program that “enrolls” about twenty-five students in a two-year residency program that now includes a masters degree as well as conflict resolution training and individualized therapy. I was not expecting, however, to find an organization that also has had a real impact on Italian political life.

My first encounter with Rondine came  when it launched its Leaders for Peace program in Washington in December, 2018. We clicked and stayed in touch, especially around their idea for a book on what they call the Rondine Method which, we both hope, will appear in the book series, Peace and Security in the Twenty-First Century which AfP publishes with Rowman and Littlefield.

Still, I was surprised when they asked me to visit Rondine and represent AfP at their event in Rome. So, after brushing up on my very rusty Italian, we headed to Rome and Arezzo.

Rondine—the Italian word for swallow—has an intriguing history. It is located in a tiny hamlet of about ten houses, a church, and a thirteenth century castle. Like hundreds of other villages, Rondine lost all of its residents about seventy years ago. The local Catholic Bishop allowed a team of idealistic activists—many of whom were then close to the Community of Sant’Egidio—to restore the village, other than the castle, and turn it into a refuge for poor people.

To make a long story short, the team shifted its focus and has been running the Student House since 1998. It offers full fellowships to talented young men and women who have suffered through trauma as a result of identity based conflicts around the world. They are normally brought in pairs, with one student coming from each side of the conflict.

So far, that does not make Rondine seem all that unique. Its claim to fame is in what the students do during their two years in Tuscany, which is longer than any trauma healing program that I’m aware of. They go through a rigorous training in basic conflict transformation skills, deal with the psychological impact of the conflict on their own lives with their fellow students (including the one who comes from the “other side” back home), and plan a project to be carried out after they return home. Now, most of them also receive a masters degree in a related field.

Some of their graduates are beginning to make a difference in their home countries. None is more visible than Marya Karapetyan who was elected to the Armenian National Assembly earlier this year after almost a decade at Imagine Center for Conflict Transformation, a peacebuilding group that works throughout the Caucasus region.

I was blown away by the impact Rondine has already had with its Leaders for Peace campaign. Created by current and former Rondine students, the campaign will be asking national governments to commit themselves to using funds that had previously been planned for their militaries and use it instead to fund scholarships and other programs that support peace.

Frankly, when I first heard about the project, I didn’t think it had much of a chance, especially in Italy with its current government. Nonetheless, Rondine’s founder, Franco Vaccari and the students not only got a meeting with Prime Minister Giuseppe Conte but convinced him to agree to sign the campaign pledge and to visit Rondine itself. Conte also agreed to have the Italian diplomatic corps spread word of the campaign around the world.

His commitment itself was purely symbolic. Italy will transfer the funds for the equivalent of five rifles to support peace education instead. Five rifles, of course, will not change the world. His commitment, however, is a tiny step in the right direction, which Rondine and others can build on.

Rondine does more. It runs a program that brings more than twenty high school students for the equivalent of an American junior year. In addition to the traditional liceo curriculum, the young people take courses in conflict transformation and design projects that they will continue when they return home for their final year of high school and prepare for the end year exams that all Italian students take.

Plans are under way for an entrepreneurship program, including a Silicon Valley style incubator—presumably the first in the world to be operated out of a thirteenth century village!

I actually knew a fair amount about Rondine before we went to Italy. After all, I’d been to the launch of the Leaders for Peace campaign. I  had also read the Italian version of Vaccari’s short book on the Rondine method before giving my remarks at the launch.

I was not prepared, however, for the impact Rondine has had on Italian politics. While it is still far short of what its leaders would want, it is safe to say that it has had an impact on policy makers, the likes of which one rarely sees in the peacebuilding world.

Think back to the new Leaders for Peace campaign. Recall that Prime Minister Conte came to visit Rondine which is three hours from Rome. Recall, too, that his government made the symbolic but not trivial commitment to transfer money from the military to fund scholarships in peacebuilding and to help convince other governments to do the same.

Now, add to that what I saw at the session at the senate. The event was chaired by a leading RAI (Italy’s state broadcaster, roughly equivalent to the BBC or NPR) radio journalist. Two Italian senators spoke, along with  the Secretary General of the Italian Foreign Ministry and the aforementioned Karapetyan. My panel had the CEOs of two of Italy’s leading foundations and the director of public affairs for Matera, which has been designated a world cultural city by the European Union.

Much of that impact grows out of Rondine’s links with the progressive wing of the Catholic Church and to the years it has spent interacting with policy leaders. Still, there are lessons we can all learn from its experience. 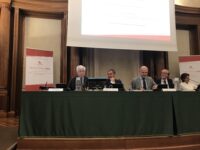 Toward a Murmuring of Rondines

The word Rondine itself tells us a lot about the challenge this community faces along with the Citadel of Peace. Rondine is the Italian word for swallow, and the community’s web site features images of that tiny bird.

The swallow and its so-called murmuration has a privileged place in complexity theory. As you can see in this video, it turns out that a large group of swallows can be flying around seemingly randomly and then all of a sudden go into a formation and fly away. No one knows how or why what complexity theorists call emergent behavior occurs.

So far, the World School has created more than 200 rondine that it has sent back to their homes. So far, they haven’t found a way to create their own murmuration.

Gretchen and I came back from Rondine committed to doing what we can to make that happen.