Yesterday, I read a book by someone I don’t know and had a Zoom conversation with an old friend.

Both blew me away and both gave me new insights on a project I’m beginning and on, well, the rest of my life.

The Fabric of Character 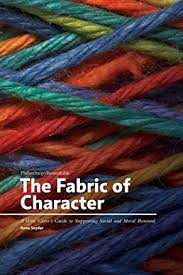 I stumbled onto the book. I’d read David Brooks’ The Second Mountain which I reviewed last week. In it, he mentioned Anne Snyder’s The Fabric of Character, which seemed so compelling that I stopped reading and ordered it from Amazon. From his description, the book looked at grass roots efforts to instill character and promote social change. Only later did he fess up that she is his wife.

While I loved both books, hers did a lot more for me as I point out in a separate review. I’m not one who would have talked a lot about character before reading the book because, as she says, the term can feel stuffy and old. However, when you read her sixteen themes and six case studies, the power of character and its impact on social change in general and peacebuilding in particular becomes clear.

I was particularly drawn to a few of her themes that reflect the best of what I see in my community’s work, much of which I had just written about in my forthcoming textbook which is sitting at my editor’s. In my terms:

My Zoom call was with Helena Puig Larrauri who is  the co-found of Build Up^ which puts on an annual conference on peacebuilding, technology, and the arts and is one of my favorite people in the entire world. We had agreed to talk to discuss how I could help her team raise some money (I am on Build Up^’s board), help them plan for this year’s conference in San Diego/Tijuana, and bring her up to date on the project I’ll describe in the next section.

As we talked, I realized that Helena and Anne do very similar kinds of work. I also realized that they had to be about the same age.

But, because they live continents apart and come from even more different social and political worlds, they was no way they would bump into each other.

They should, because they are actually doing very similar things.

Helena and her team probably wouldn’t use the word character to describe their work. But, if ou look at the four bullet points I took from Anne Snyder, she would have shook her head and said something like, of course.

Where People Take Their Conflict

I’m involved in the beginning stages of a project that will take my colleagues in the conflict resolution and peacebuilding communities to work with people who don’t think of themselves as part of our world but who do our kind of work in the course of their day job–members of the clergy, teachers, librarians, coaches, social service providers.

In other words, the very people Snyder profiles in her six case studies.

In the course of taking to Helena and reading Anne’s book, I realized that we will have to do more than just bring these people together. Snyder actually has sixteen questions to ask about character. However, if you just take the four I listed above, there’s a lot of work to be done.

And it will be fun.

That brings me back to David Brooks and his idea of a second mountain which I  also wrote about last week. So I won’t bore you with that here.

His notion is that we should all end up climbing a second metaphoric mountain in our lives. The first one involves creating and sustaining a professional career and the like, which is all about your personal goals. Your second mountain is about doing something bigger in the second half of your life.

One of Snyder’s cases is Wake Forest University’s efforts to teach the whole student. That includes a wonderfully revamped career services office that has set up mentoring programs that link older alums with current students in ways that both benefit from. My beloved Oberlin has the same kind of program that has shown me time and time again that my second mountain involves learning from younger people like Helena and Anne.

To use a term Helena would probably not use, but I would expect rolls easily off of Anne’s tongue, I’m blessed to have been exposed to them both