Last week, I had the privilege of attending the seventh annual National Community College Peacebuilding Seminar. Organized by the  indefatigable champion of peace education at community colleges, David Smith, the seminar brings between ten and thirty community college educators to Washington for four days of sharing and learning that includes site visits, talks from (supposed) experts like me, and, most importantly, opportunities for community college faculty members to learn from each other.

Community Colleges as a Hidden Treasure I

I go each year and, when possible, attend the whole conference because I don’t know a lot about community colleges. As an academic, I’ve spent my entire career at selective liberal arts colleges and research universities.

Yet, as David reminds us each year, forty-five percent of American college students spend time at community colleges. And, as financial pressures on the entire system of higher education continue to mount, those numbers are bound to go up, too.

At a time when many of us worry about the lack of social mobility in this country, community colleges are one of the few bright spots we can point to. That forty-five percent includes a disproportionate number of first generation and immigrant students as well as young people of color. Community colleges also provide opportunities for older students to return to school once they realize that they want a higher education, something that is much harder to do at a school like Oberlin where I went.

Community colleges are a hidden treasure in peace and conflict studies, too.

To begin with, most of my colleagues would be surprised to find out that there are about fifty programs in peace and justice studies at American and Canadian community colleges—and these are only the ones that David knows aAout.

Many of them offer a wide array of courses. Golden West Community College in Huntington Beach CA offers a major with five required courses in peace and justice studies and a selection of electives that students have to choose from in other departments. Gateway Community College in New Haven CT has an even broader set of course offerings and requires an internships. A new Sustainable Development program at Bristol Community College in Fall River MA extends students’ awareness into applied environmental studies.

Even more impressive is the work community colleges can do beyond their campuses precisely because they are community colleges. Most attract students from the immediate region. Most students also have jobs and families that anchor them in those communities. Thus, it is only natural that faculty members and students alike look for ways to apply what they learn in the classroom in their daily lives. To cite but one example, students and faculty members at Valencia College has a long history of community based projects, including Orlando Speaks which brought police officers and local residents together in a series of dialogues on race, crime, and related issues, which is one of the very best initiatives of its kind in the country. Quite frankly, it is much harder for a residential college like Oberlin to intervene quickly or effectively when crises occur in their cities.

I don’t mean to overstate either the extent or the impact of these programs.

After all, there are only about fifty of them in America’s 980 public community colleges. Many struggle to attract funding and other forms of administrative support. Many of their students struggle to find balance between school and the rest of their lives. Community college students in general tend to be far more diverse in terms of intellectual background, socioeconomic status, and just about everything else than students in the kinds of institutions I’ve taught in.

Add to that the problems faculty members face. Even more than is the case at four year colleges and universities, few of the wonderful people I’ve met over the years at David’s seminars have degrees in peace and conflict studies. They normally have a teaching load that is at least double that at a place like George Mason or Oberlin. They are expected, too, to be engaged in all aspects of their students’ lives, not just the parts that take place in their classrooms or their offices.

And as the faculty members point out to David and me every year, they are rarely treated with much respect by the rest of the academic community. That’s not just true of peace and conflict studies. I see that even more when I spend time with political scientists who rarely include community college faculty members in their national or regional professional meetings.

The good news is that David has succeeded in at least one key respect. First while he was on the staff at USIP and now as a consultant, he has been the driving force behind the creation of a critical mass of community college programs. 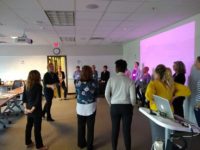 That, in turn, might lead him and the rest of us to add another dimension to the seminar next year. So far, we have mostly tried to inform the faculty members who come to Washington about what organizations like AfP are doing. Similarly, David asks people like Ana Patel of Outward Bound to illustrate what can be done in experiential education that the faculty members might not know about.

However, now that we have a critical mass of experienced faculty members, it might be time to focus more on what is happening at community colleges themselves. It has never been clear to me that the professors who come really get a lot from my talks or those given by my colleagues. They could, however, learn a lot from each other, sharing their experiences of what works as well as their frustrations and obstacles.

It will be fun working with David and his colleagues as these annual seminars evolve.