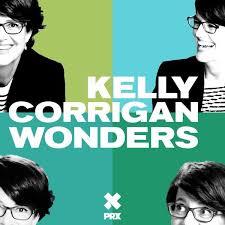 … and Changes the World

Regular readers already know of my (intellectual) crush on Kelly Corrigan and how her thinking has affected how I think not just about my life’s work as a peacebuilder and political scientist but about my life in general.

I want to use this week’s post to introduce you more fully to her work, because I’m sure it will improve your life, whatever it is that you do.

I had never heard of her until my wife and I watched the PBS NewsHour on April 29, 2020. As was the case in those early days of the pandemic, the show was filled with dreadful news. Then, as it neared its end, Judy Woodruff announced that Kelly Corrigan would be doing one of those “humble opinion” segments which I normally don’t enjoy because they feel like fluff to the social scientist in me. But, hey, it was early in the pandemic, and I didn’t have anything else to watch.

In less than three minutes and three hundred words, Kelly changed my whole attitude on the pandemic and helped me put something I already did in much sharper focus, which I’ll return to in the second half of this post.

So, in case you haven’t seen it, stop reading, click this link, and watch.

At the time, I was not thinking about imagining a world after COVID let alone what we would have had to do to “nail it.” With her wonderful images of the woman with seven bottles of vermouth and her inspirational thoughts about what we now call essential workers, Kelly shifted my mind set away from analyzing what’s wrong and toward the better future we could create and how we could create it.

As soon as Judy Woodruff gave her equally powerful signoff which you can see at the end of the clip, I had Jeff Bezos zip a copy of Kelly’s most recent book, Tell Me More, to my Kindle, which I’ve reviewed elsewhere 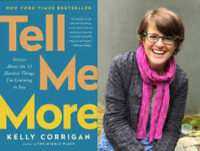 . It isn’t the kind of analytical social sciency book I normally read, but I stayed up until about 3:00 the next morning because I couldn’t put it down. Then, I started following her on line (no, I never trolled her), watched the three part series she did on PBS in the fall, and started listening to her podcast, Kelly Corrigan Wonders in which she interviews thought provoking people in ways that end up making the listener think, too. It is also clear that both she and her interviewees had a wonderful time, often laughing their ways through some of the world’s most serious topics—without ever losing sight of their seriousness. That’s especially true of the ten part series on how change happens that she is currently in the middle of.

The interviews and her takeaways, which she adds at the end of each episode, led me to a simple conclusion. Kelly Corrigan just might be the most effective peacebuilder I know even though she has never thought of herself in those terms.

I suspect that’s the case because as she calls her podcast, Kelly Corrigan wonders. And, I suspect, Kelly Corrigan also learns while she wonders. She ends each episodes with useful questions which are useful in part because it’s clear that she had already thought about their implications for herself long and hard before she sat down at her microphone or editing board.

A Note on Timing

It’s not just her work on racial issues, though there is plenty of that. Rather, she wants us to think more deeply about who we are as humans. About our own lived experiences. And, how we can change them.

About race and a whole lot more.

As the new year was about to begin, she asked her listeners to respond to three questions:

She vowed to read what everyone sent in and then draw some conclusions as part of a twenty minute video which she posted on her Instagram account in January 13. Assuming you have an Instagram account, you can view it first hand, but let me summarize her main points here.

I don’t mean to make Kelly seem superhuman. She will be the first to tell you that she isn’t. In fact, her imperfections are part of her special appeal.

I do mean to suggest that those of us who want to build peace or promote other forms of large scale social change need to find the Kelly Corrigans of the world because they know how to grab people’s minds through their hearts in ways most of us activists can’t.

My own pathway toward becoming an active peacebuilder as well as a political scientist began after I got involved in the Beyond War movement in the 1980s. They, too, understood both the power of personal change and the importance of the stories we tell ourselves.

They were what I call accidental peacebuilders who got to conflict resolution and the like after years of working on other issues in which personal growth can lead to social change.

Kelly is even more of an accidental peacebuilder than they were. In fact, I’ve never even heard her use that word or anything like it.

Nonetheless, she gets peacebuilding as well as anyone I know. She understands that a peaceful world begins with self-aware, curious, and empathetic people. Unless we create them by the millions, the odds of any movement I’m a part of producing the paradigm shift I drone on and on about are pretty much nonexistent.

I don’t think the Kelly Corrigans of the world can change the world on their own. They certainly aren’t going to meet the end of next week timeline I give myself. But their work has to be more at the heart of what we do than it has been so far.

Bringing Out the Kelly Corrigan in All of Us

I just finished a series of blog posts on how we need to summon up the best in ourselves if we want to overcome the traumas that have made the last year the worst in my adult lifetime.

I’m obviously convinced that Kelly is a person who can help us do that.

As I’ve become a devourer of podcasts while on my daily walks from our house to our grandkids and back again,, I’ve found others in the media space, include the Radio Lab team, the folks who produce Hidden Brain, and Manoush Zomorodi both in her own work and what she does foR the TED Radio Hour.

To name just a few.

Even more importantly, we all have a bit of Kelly Corrigan buried inside ourselves—even if we don’t have her quirky intelligence or seemingly endless set of connections.

Every community I’m a part of has people who wonder almost as much as she does, can envision a future almost as clearly as she can, and can at least take some baby steps toward “nailing” their own version and vision of that future.

In the end, I’m lucky. My job at the Alliance for Peacebuilding is to identify more and more of those creative people who do not think of themselves as peacebuilders, whatever issues they happen to be interested in. And help them surface their inner Kelly Corrigan.