Because of my job as Senior Fellow for Innovation at the Alliance for Peacebuilding, I read a lot of books from outside of our field so that I can help my colleagues learn about ideas that they would not normally encounter in their everyday work. A few years ago, I started reading about infinite games and knew they were important for our work. However, it was only when I read Simon Sinek’s new book, The Infinite Game, that its relevance for peacebuilding and conflict transformation became clear to me. 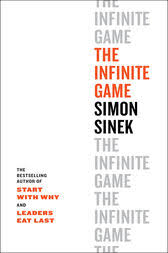 Let me be blunt.

If we don’t think of peacebuilding as an infinite game, we will limit the progress we could conceivably make, whichever part of the field you happen to care the most about.

Finite and Infinite Games in a World of Wicked Problems

Game theory is a big deal in the social and natural sciences these days. Peacebuilders, for example, undoubtedly, encounter the prisoner’s dilemma early in their educational careers. Other games are central to modern economics, psychology, strategic studies and more.

There is only one problem. Most of the games we study (or teach) are finite games. They have an end point. They have winners and losers. They lend themselves to the kind of conflict resolution we learn about in books like Getting to Yes.

Unfortunately (or fortunately), most of the problems that we face today don’t lend themselves to finite games, no matter how sophisticated. And, there are lots of sophisticated finite games out there, which I won’t bore you with here.

I can ignore them here because they aren’t terribly good at helping us understand the kinds of wicked problems we peacebuilders face and that I keep harping on whose causes and consequences are so inextricably intertwined that the can’t be solved quickly, easily, or separately–if they can be solved at all. As Horst Rittel and Melvin Webber who coined the term forty years ago argued, there is no ending point in dealing with a wicked problem. There is neither a win/lose or a win/win outcome that settles everything once and for all.

That’s what most peacebuilding issues. A system or society can become more peaceful or less peaceful, but we’ll never get to peace itself unless we somehow reach some unreachable utopia. As I also keep harping about, conflict is a fact of life and always will be. We might reach win/win outcomes on some aspects of complex issues, but only on some aspects. There will still be plenty of conflict left to deal with.

Peacebuilding and conflict transformation, therefore, are best treated by thinking in terms of infinite games that have no end point and that keep on going forever—or at least for our entire lifetime and beyond.

They have known and unknown players. Rules change on the fly. Patterns emerge and shift like a kaledescope. You can win round after  round and end up losing the whole thing if, as is rarely the case, the game ends up at an ending point.

Simon Sinek wrote his book with business leaders in mind. However, his five rubrics make sense for those of us who are, in the John D. and Catherine T. MacArthur Foundation, trying to “create a more just a peaceful world.”

The bottom line is simple. If we don’t begin to see our work as a kind of infinite game, we are not likely to see our impact be taken to scale. We will, in other words, continue to be marginal players in a world that needs us to maximize our influence over both popular culture and public policy.

Thinking in terms of infinite games girds us to both take for granted the idea that we are in this for the long hand and that everything we do—from the ways we lead to the ways we run our personal lives—will have to adapt to changing circumstances.

On one level, that can be scary.

On a more important level, it can also be lots of fun.