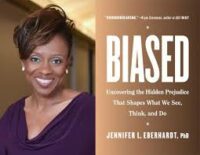 The United States has come a long way on racial issues since my youth. Segregation and most forms of legal discrimination are long gone. We have made tons of progress on tons of other fronts as well.

Racism, of course, has not disappeared with those social and legal changes–something we see when we see every day while watching the news.

And that’s why Biased is so important.

Eberhardt builds on a generation of scholarship and a lifetime of personal experience in exploring the role of implicit bias and other forms of continuing racism in American society–including its impact on her own life and her own biases.

Readers who have been following the discussion of implicit bias will find a lot of familiar ideas in this book, including the ways some prejudices may be hard wired while far more of them are reinforced by our experiences. Unlike other working in this space, however, Eberhardt explores two key issues that are both unusual and refreshing:

At a time when race relations seem to be getting worse–at least given the tone emanating from the White House–this is an important, refreshing, and empowering book.