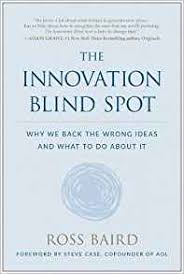 My colleagues and I have been thinking about creating a peace business sector for a long time, which means we have been thinking about how to finance those kinds of ventures for almost as long. We have always shied away from making concrete plans for any such fund, because the models we had to look at were so large and the resources available to us are very limited.

Then, a friend suggested I read Ross Baird’s The Innovation Blind Spot.

Baird is the founder and CEO of the DC-based investment fund, Village Capital. Like his company, the book lays out an amazingly simple but powerful way of thinking about investment. You identify a problem,  find the entrepreneurs with the best chance of solving it, and help them get the tools they need.

There are a couple of differences, however, between the Village model and traditional innovation financing.

First, the problems Baird and his team identifies are in underserved areas both in the United States and around the world. They are not particularly interested in investing in the next FANG company. Rather, they want to work in places like Appalachia where poverty and the lack of opportunity for upward mobility seem to go hand in hand. Village Capital has funded some fairly large operations like Neighbor.ly, but even if is trying to do something unusual–crowd fund municipal and other local bonds (truth in advertising, a friend of mine is Neighbor.ly’s Chief Product Officer).

Second, Baird advocates making a break from models of corporate funding of socially useful projects that are based on corporate social responsibility or what he calls a two-pocket solution. From that perspective, one makes money, puts it in one “pocket,” and then distributes some of the profits from a second one. Village Capital has always been based on what he calls a single pocket model in which making money and meeting social needs are part and parcel of a company’s DNA.

Third and more importantly for someone from my background, Village Capital usually starts small and acts in a way that mirrors what we refer to as local peace building. On the assumption that residents of a community have the best ideas about building peace there, organizations like Peace Direct dedicate themselves to supporting local activists and their work. The same logic holds for Village Capital. It involves communities in making investment decisions and–despite some big ticket projects like Neighbor.ly–most of its investments are made to small start ups in places like Appalachia or Washington, DC, where the big venture capital firms are not likely to look.

I spent last week at the first (and I hope not last) Venture Peacebuilding conference. We talked a lot about ways people could invest in peace startups.

I just wish Baird and his team had been there so we could have begun convincing him to include peace business in his portfolio of startups.