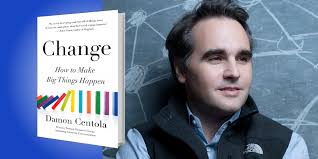 I was interested in how ideas spread for years. So, I wasn’t surprised when the pandemic forced more of us to think about how models of how viruses spread could easily be transported to broader questions of social change. It was, thus, easy, to assume that new ideas can spread virally, too, as has often seemed to happen with internet memes or even th growth of companies like Twitter or Facebook.

Sociologist Damon Centola puts some brakes on those ideas, not by undermining them but by suggesting that ideas do not spread in exactly the same way that viruses do. In the simplest terms, they meet resistance from our cultural norms, our institutions, and more. In fact, they spread through networks which can also inhibit them. As such, Centola is one of the first academics to actually use the often complex network theory in studying a series of real world problems and does so in a way that anyone can understand.

Rather than simply accepting notions (which he likes) like the importance of weak ties, Centola suggests that tough to accept new ideas and behaviors spread more slowly and unevenly, often because people we know and trust adopt them. Only once that happens can the kind of viral spread we read about in the public press take off.

Centola backs his argument up with a wealth of examples from pop culture to political protests.

In short, a book every peacebuilder would be well advised to read.