Steven Pinker is one of the most influential public intellectuals of the early twenty-first century.

His work also tends to annoy my colleagues in the peacebuilding world. 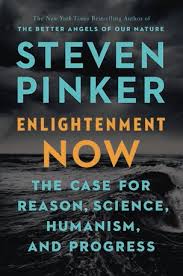 For all the wrong reasons.

In this and his previous The Better Angels of our Nature, Pinker makes the case that humanity has made a lot of progress. In the earlier book, he made the case that we live in the least violent period in human history. Although his evidence was compelling, many of my colleagues bristled at his argument because they felt that he was downplaying the severity of the problems we face–and my colleagues and I work on–today.

He takes that argument even farther in Enlightenment Now and argues that we are better off on almost every scale imaginable. That is the case because over the last three centuries or so so, our ancestors used reason, science, and humanism to produce progress on a host of fronts. Again, his evidence is overwhelming even though his critics rightly point out that he cherry picks his evidence enough to downplay some of the most important countertrends as in this review in the New York Times (paywall).

To some degree, those critiques are misguided.

Pinker is no pollyanna. He understands that the world still faces serious difficulties, something he was well aware while putting the finishing touches on his manuscript during the first year of the Trump administration.  Thus, as he states on p. 324,

As societies have become healthier, wealthier, freer, happier, and better educated, they have set their sights on the most pressing global challenges.

And, he goes on to make the argument that we should be better able to take advantage of the enlightenment’s tools given the fact that we now understand a lot more about entropy, the environment, and, especially, information science.

That is where I find his argument less compelling. As he suggests at a number of points in the book, the better angels of our nature are not bubbling to the surface much these days. As he realizes, science in all its guises is under sharp attack in the United States and beyond. And more.

In other words, even though I loved the book, I’m skeptical on two fronts.