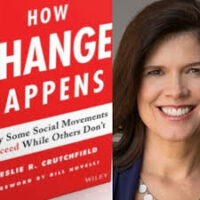 Leslie Crutchfield leads a team at Georgetown’s McDonough School of Business that has spent years examining why some social movements reach their goals. Unlike many analysts, she studies a wide range of groups, including many whose goals she disagrees with, most notably the NRA. Most of them, too, were not the kinds of radical movements seeking to dramatically alter the structure of power as was the case in the organizations studied by the likes of Charles Tilly, who shaped a lot of my thinking on the subject when I was in graduate school and in the first few decades of my career.

Groups that succeeded were able to do some version of the following:

This is a remarkable book that everyone interested in social movements should read.