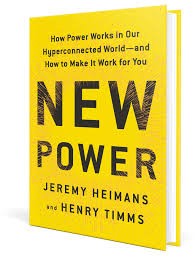 I read most of this remarkable book on the Washington Metro commuting to and from a conference on the state of American democracy. The organizers brought together some of the leading analysts of comparative and American politics.

Unfortunately, I was the only one there who raised the kinds of issues Jeremy Heimans and Henry Timms raise in New Power. That is unfortunate because I’m not convinced that we can make more than incremental progress in dealing with the issues we discussed without redefining how we think of and use power along the lines they suggest.

Heimans and Timms discuss a new kind of power that flows from the bottom up. That is qualitatively different from the way our government currently operates. As they see it,

the U.S. government relies on a trusty old power playbook, using its superior position to literally drop ideas from on high. Even when using social media, its default is not to engage, but to command (6).

That would hold whether you are talking about either the Trump or Obama administrations.

Instead, the authors try to lay out new power models that:

are enabled by the activity of the crowd without which these models are just empty vessels. New power models demand and allow for more: that we share ideas, create new content or assets, even shape a community (8)

Theirs in by no means the first book to make this kind of a point. However, it is the first to show how the new power can be used politically and how it can be used in support of goals we (whoever we happens to be) support or oppose.

They talk about a new mindset in which we:

The most successful organizations they study include everything from the Ice Bucket Challenge to Giving Tuesdays to new companies like Local Motors. All succeed, well, because they follow a script that reflects the letters in the word success in ways that spur people to act, connect to each other, and can be expanded “sideways” into other niches of our society:

In fact, they use dozens of cases to show how companies and communities have grown by sharing information, expanding into new social milieux, adapting core principles in new settings, generating new sources of funding, and in the end, shaping new markets. In the process, organizations that use new power also generate their own internal cultures that stress collaboration, innovation, and even quirkiness. At the heart of any of these enterprises is the assumption that they have to build trust and, with it, what systems analysts call virtuous circles (rather than vicious cycles). In the process, new kinds of leaders emerge who seek solutions to a wide range of problems by involving as many people as possible in the process and empowering them along the way.

Not surprisingly, they point out how organizations that have skipped some of these key steps have gotten into trouble, including Facbeook, Uber, Invisible Children, and more. Indeed, one of the things I also liked about the book is that it talks about two hybrid forms of organization in which some–but only some–of these principles are followed.

I also like the fact that they realize that new power is not a panacea. In the “wrong” hands, it can lead to less than desirable outcomes as the rise of ISIS using these tools suggests.

In closing let me return to the conference I attended while I was reading this book.   These kinds of themes were mostly missing from the discussions (except when I raised them and, then, only obliquely). However, their possible usefulness in dealing with the current crisis in American politics should be evidence in the answers to four questions they pose in the middle of the book. If you answer yes to all or most of them, new forms of power are very much worth considering: