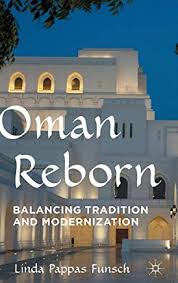 Just before Christmas, I spent a week in Oman, where I had been invited to participate in a retreat for religious peacebuilders interested in reconciliation. The event was held in Oman for reasons that had little or nothing to do with the country. Nonetheless, I decided to learn what I could about this country I knew next to nothing about. So, I read a number of books, the best of which was Linda Pappas Funsch’s, Oman Reborn. Funsch has been in and out of the country over the years during which it has made one of the most remarkable turnarounds that turned it into one of the world’s most successful and peaceful countries, something Funsch clearly gets at in the second word of her title.

In the fifty years since Sultan Qaboos came to power in 1970, the transformation has been remarkable. At the time, the country had six miles of paved roads, no public health or education systems, and seemed to be one of the poorest and least promising countries in the region, despite the fact that oil had recently been discovered there.

The first thing Funsch does is to remind (or perhaps inform) the reader that Oman had an illustrious history that spans centuries. Because of its location, it played a major role in global trade spanning Africa and East Asia as well as the middle east. That also turned Omanis into what she calls a polyglot people whose diversity long antedated the petrochemical economy and the arrival of large expat populations throughout much of the regions. Oman also benefits from a religious tradition that revolves around Ibadi Islam that is the most tolerant of the faith’s many sects.

Oman reached its historic peak before the Portuguese and other Europeans arrived beginning in the late fifteenth century. By then, Omanis had established religious and commercial beachheads from China to Tanganyika. After forcing the Portuguese out, the country egained a degree of prominence under the Al Bu Said family which still runs the country today.

By the middle of the twentieth century, the country’s fortunes had sunk once again. Sultan Said Bin Taymur all but stopped history in its tracks and cut it off from most forms of economic and social development. Meanwhile, Oman faced a series of rebellions.

Eventually, his son, Qaboos, overthrew the Sultan in 1970 and set the stage for the transformation whose fruits I saw in 2019. As she notes, that transition would not have been possible without the discover of oil, the production of which came on line in the early 1970s.

It would not have been possible without Qaboos either, who has been an unusual ruler for that reason to say the least. He is the unquestioned leader who has done well personally, as his two yachts (that look like small cruise ships) in Muscat’s port suggest. However, he has also ruled generously and, most would say, wisely.

The oil profits have been used to create the most balanced distribution of income and wealth in the region which you can see in the modern amenities that line Muscat’s streets—or in the statistics gathered by the United Nations or World Bank. More importantly for my purposes, Qaboos has used his power to enhance national reconciliation and incorporate more and more of the average Omanis in decision making both through elections and the creation of other institutions that consult with broad swathes of the population. That starts with the Sultan himself who routinely went on what we Americans would call listening tours of the country before his health began to deteriorate in the 2010s. You can see the benefits of that rule in projects that range from the Grand Mosque which was built to be a welcoming center for people of all faiths or the Muscat Opera House which indulged the Sultan’s love of western music but also serves as a venue for world music of all sorts.

Qaboos and his colleagues also realized that oil will not last forever. Therefore, it has created an educational system that is already training a new generation of Omani entrepreneurs. To cite but one example, all Omani university students must be proficient in English and information technology before they begin higher education. Similarly, university tuition and health care are provided free for all citizens. Perhaps most importantly, Oman is less dependent on expatriates than other countries in the region. Finally, Funsch notes that Oman has avoided many of the excesses that other Gulf states have fallen prey to, which a tourist notices immediately with the absence of any buildings taller than about eight stories in Muscat.

As this review suggests, there is a lot more to Oman and its successes than Funsch discusses. Nonetheless, if you are interested in what I have elsewhere called peacebuilding without peacebuilders, her book is by far the best place to start.