Technically, Pathways to Peace is not a book. It is an ambitious (and therefore reasonably dense) 65 page report jointly written by the World Bank and the United Nations. Both have long been interested in peace, but this document marks the first time that they have tried to address the issue together, and done so in a novel way. Especially given their position in the international system, it is a message we should all pay close attention to. 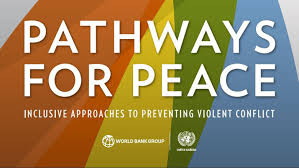 Put simply, Pathways for Peace calls for the most inclusive and holistic approaches to peacebuilding I’ve seen coming from mainstream organizations like these two. And is their wont, the two organizations marshalled a lot of evidence in order to make their case, which is another reason why this and subsequent reports they issue will be required reading by peacebuilders for decades to come.

Their diagnosis of the problem(s) is not all that unusual. Despite the longer term trend toward a more peaceful world, the short-term indicators are not good. Violence is up by a factor of five I this decade lone. Rarely does those conflicts involve interstate war. Often, however, the battle lines cross international borders. And as is also their wont, they cost out the effects of all that violence, suggesting that the world could save about $70 billion per year if it adopted the most sweeping prevention programs the two organizations envision.

More important is the fact that they call for holistic responses to the realities and potential for political violence. Their “pathways” include simultaneously addressing institutions, structural relationships, and individual decision makers who have helped make violent conflict such a prevalent part of the human existence.

But the key term in all of this is inclusion so that everyone (and not just the kinds of elites and World Bank typically work with) is involved and works on all of the issues that give rise to violent conflict in the first place—justice, security, policy making, youth empowerment, and the like. They emphasize, too, the need for change in areas the two organizations have not always focused on—adoption of new global norms leading to a culture of peace and commitment to the fact that peacebuilding is not going to happen quickly.

On one level, these are not new ideas. Many Alliance for Peacebuilding members and others have been saying things like this for years. What is new is the source. It’s the World Bank and the UN that is calling for inclusive pathways to peace.

In a way they have to, because these are the only viable ways of reading any of the 17 Sustainable Development Goals that the UN adopted in 2016.

As the cliché has it, the proof is in the pudding. And, to use another cliché, it’s our job in the NGO community to hold them accountable.