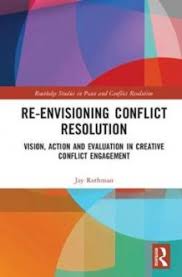 To be honest (and a bit embarrassed), I didn’t know about this book until Jay Rothman dropped by our office the other day. He is one of the intellectual leaders in the conflict resolution field and had been one of my favorite colleagues and friends in the field until he moved to Israel a few years ago. So, while he was in a meeting with some members of our staff, I pulled out my iPad and ordered the Kindle version of his new book.

As someone who reads a lot, I’m partial to short books, and this one weighs in at 144 tightly packed pages–at least on my Kindle. They are all worth it.

Rothman takes on one of the toughest questions facing the peacebuilding field today. Even though the world desperately needs our services, the funding for our work has not exactly been streaming in. While there are many reasons why that’s the case, any such list has to include our failure to demonstrate the impact of what we do through rigorous evaluations. He also is among the few leading authorities who doubts that resolution, per se, is ever possible and that the most we can hope to do is to engage with conflictt.

So, the first reason to read this book is that Jay unpacks a lot of the intellectual fuzziness around these issues by discussing what he calls action evaluation. Like man of us who have incorporated systems thinking into our work, Rothman is convinced that we can never design the perfect project from scratch let along fully resolve any particular conflict. Rather, his action evaluation methods have peaccebuilders constantly interact with their environment and constantly adapt their projects as they proceed. In other words, rather than only evaluating projects as most of us do when they are completed (which he calls summative) when they end, he favors building ongoing evaluation into the design of each project.

Rothman is by no means the only author to argue along these lines. At the Alliance for Peacebuilding, my colleagues are working to systematize the way we do evaluation in ways that go beyond what he talks about. In fact, he came to our office ten days ago to meet with that team, not me. I just happened to be there.

By far Rothman’s most important contribution lies in the ways he applies his approach to three cases he personally worked on–a dispute over fisheries in New England, community building at an integrated college in Israel, and easing racial tensions in Cincinnati following a police shooting and a federal court decision in the 1990s. I’ll focus on the Cincinnati case here because I was on the fringes of that effort while working at Search for Common Ground.

In the early 1990s, Cincinnati had some of the worst race relations of any American city. That led a Federal District Court judge to issue a ruling that included hiring Jay’s team to do some basic reconciliation work in that troubled city. In keeping with his ARIA methodology, Jay convened roughy 100 representatives from eight of the key constituency groups in the city and let them, first, vent their frustrations. they, in the larger groups and working with leaders from each, he helped them develop a set of goals that city leaders and average citizens alike could pursue. In time, we at Search for Common Ground, joined the leadership team for the project which had limited success in large part because we were never able to get a lot of traction on the ground. Nonetheless, as Jay shows, the broader effort went a long way toward easing some of the deep tensions precisely because we all actively evaluated our work and adapted what we were doing in the light of what we learned.