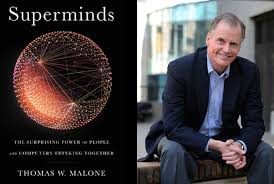 It took me a while to get to Thomas Malone’s Superminds, but I’m glad I did.

It is one of many recent books that tries to get at how and why people collaborate in producing innovations in all areas of life. It is also one of the best because it is one of the most comprehensive and logical—at least of the books I’ve read.

Malone, who teaches at MIT’s Sloan School of Business, starts with a pair of what are now not  very unusual assumptions—that we learned almost everything worth knowing because people collaborated and that our ability to do so reflects the way our unusual brains evolved. What sets his book apart is the way he explores five main ways our brains have evolved reflecting the broad periods of human history and how they could lead to a new burst of innovation and cooperation using today’s superminds of both the human and digital varieties

Early on, he defines a supermind as “a group of individuals acting together in ways that seem intelligent.” Thus, any collection of people is or can be a supermind, including seemingly random crowds that don’t bump into each other when walking down the street.

He is particularly interested in what he calls general intelligence or “the ability to achieve a side range of different goals effectively in different environments.” It is that skill that makes us different from computers and other machines whose powers worry and/or excite so many of us.

The book takes us in multiple directions, but for peacebuilders, the key lies in the ways he sees computational power enhancing human general intelligence because superminds can be “trained” to make better decisions. That holds across all types of human organizations, from small tribes to hierarchies to democracies to markets to communities and, finally, to the emerging norm—networks.

Although he doesn’t quite use this terminology, Malone is convinced that we can use the affordances of today’s technologies to build stronger, more interconnected, and more effective communities by building off of the networks they spawn.

That’s the case because human and/or machine-driven superminds can take advantage of a number of characteristics that lead to effective decision making—size, diversity, identifying outliers or “black swans,” interdependence, and more.

This thought provoking book should be of interest to all peacebuilders and anyone else who is interested in producing large scale social change.