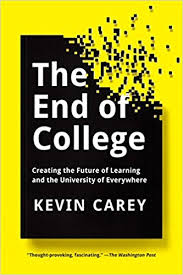 The End of College

I have been thinking a lot about higher eduction these days, because I’m increasingly unhappy about the state of things these days. Then, I spent a weekend at Oberlin planning my fiftieth reunion and came away quite excited about some of the interesting things they are doing. So, I decided to go back and reread Kevin Carey’s book, The End of College, which had helped strengthen my grumpiness when I read it three years ago when it came out.

Carey argues that American higher education focuses on three things together, a choice it made without a lot of reflection or analysis:

Carey suggests that it is probably impossible to continue doing all three given both the costs of higher education and the changing needs of our society. I’d add to that a worrisome statistic that the Oberlin admissions shared with us. There may be no more than 20,000 high school students a year who think in terms of attending a liberal arts college.

Too expensive. Too impractical. Too liberal. The list goes on.

Carey does a brilliant job of exploring how we got to this point which you can read on your own. More interesting to me at this point in my life are his suggestions about what to do about the problem which involves adapting and fundamentally transforming some of the holy grails of modern higher ed. These are the ones I find particularly intriguing for a world in which exponential rates of change are the only constant:

Carey explores how some of these ideas are already being put into place even at high end conventional universities like Stanford, MIT, or Carnegie-Mellon. I was delighted to see that my beloved Oberlin is beginning to do some of the same. That said, it’s way past time to shake up higher education.

It is easy to raise red flags and make the case that higher education today is doomed.  And Carey doesn’t make that case.

That point got driven home when the David Kamitsuka, academic dean of Oberlin’s College of Arts and Sciences ended up reading an op-ed from the campus newspaper, Can Oberlin Survive. He set us up to assume that the article had been written in the last few weeks.

Turns out that it was written by one of my housemates, Paul Osterman, for the last issue of the 1967-1968 Oberlin Review. We all got a lot of embarrassed laughs out of it, especially since the article’s author currently teaches at MIT.

In the end, David and Paul were right to ask whether Oberlin could survive and assume that it would.

At the same time, I’m glad that they are also asking the kinds of questions Kevin Carey lays out.