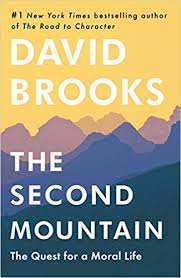 I have been a critical but adoring fan of David Brooks for many years. I often disagree with him on specific issues, but have always found his ideas intriguing and his openness compelling.

All that got magnified when I met him when he gave a talk at Oberlin a decade or so ago and we spent a couple of hours together afterward. I learned then that he walks the talk.

And that’s what he does in this book in an often personally revealing way.  As the title suggests, he talks about how lucky people (my term) climb two mountains. First, they succeed professionally with all the self-absorption that entails. Then–and here’s where luck and hard work come in–they climb a second mountain that tends to be “relational, intimate, and relentless (xvi).”  In climbing the second mountain, we commit ourselves to new causes, relationships, and service to others, all that is greater than ourselves.

He knows of what he speaks. In typical Brooks fashion, the book is filled with literary references.

This time, however, the book is largely about himself. After decades of success and hard work, he found himself alone, adrift, seeking meaning in his life. In the book, you climb the second mountain with him as he explores faith, relationships in general, and his own in particular.

As always, I end up thinking about a slightly different mountain that defines what he calls vocation, spouse/family, philosophy/faith, and community in slightly different ways. But, I’m a better person for having read this. You will be, too.