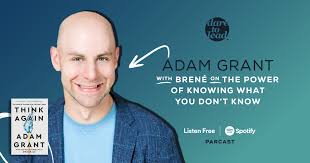 I’ve been a huge Adam Grant fan since I stumbled on and loved his first book, Give and Take. My admiration only grew when I discovered that he is the co founder of the Next Big Idea Club, which both promotes up and coming non-fiction writers and uses part of its membership dues to give away copies of the books it selects to high school students who could not have afforded to buy them.

Think Again is a vital read for peacebuilders for three reasons.

First, it is something we ask our clients to do all the time. We may prefer terms like reframing, but we are in essence asking the people we work with to recast the issues that divide them in a new light that opens the door to creative possibilities.

Second and more importantly, Grant suggests that we all have to think again, including those of us who find ourselves in a management or leadership role. In fact, if I have a critique  of the community  I work in, it is that we aren’t willing enough to think again or reframe our own positions. That might not be such a big deal when we are working in places far removed from home. But now that we are working more in the United States where we have skin in the game and have a stake in the outcome, we ignore our own rigidities at our peril.

Third and more importantly yet, Part III of Think Again speaks directly to the peacebuilding community. Grant is an organizational psychologist who teaches MBA students and undergraduates at the Wharton School. As a result, most of his examples in his earlier books came from either interpersonal or corporate life. Here, he takes off from the work of conflict resolution professionals like Amanda Ripley and Peter Coleman.

In short, this is a book that all peacebuilders need to read.

And, as befits a best-selling author, the book is beautifully written.

Spoiler Alert: My whole blog post in the week of April 6 will be devoted to Amanda Ripley’s High Conflict. She graciously let me read the page proofs. It is the best book I’ve ever read on conflict resolution. And you will see why on the day it is released.