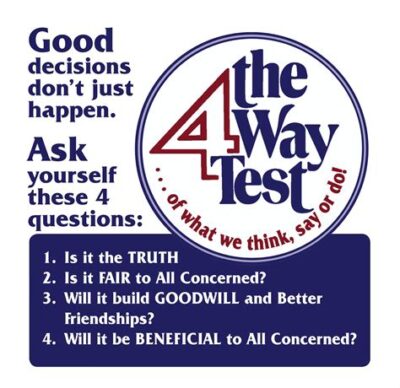 As I wrote a few weeks ago, my wife and I have joined the Rotary E-Club of World Peace and sit in on weekly meetings of an ad hoc group of Rotarians who are working for racial justice and healing in Portland, Oregon.

Even when we joined, Rotary didn’t seem like a good cultural fit for me. A lot of my personal identity is anchored in the fact that I was a classic 1960s radical, which didn’t seem to mesh with at least my vague understanding of what Rotary and service clubs in general were all about.

All that got disabused right away in ways that I won’t bore you with again (but which you can read about in that earlier blog post) other than to say that even a quick visit to Rotary’s home page will show you how committed it is to building a better world through its members’ service.

In the last six months, however, I’ve dug more deeply into what Rotary calls the Four-Way Test” which animates everything its clubs do around the world. Many clubs recite at the beginning of each meeting; the E Club of World Peace to which we belong begins with one member’s (often whimsical) take on it.

As I’ve spent more time with the idea and have seen it infuse the work of the two groups I work with, I’ve come to realize that, if we really take itss implications seriously, Rotary and others who use the test could and should become powerful agents for social change not only here in the United States but around the world.

The Four -Way Test dates to 1932 when Herbert Taylor developed it to help save an aluminum company that was in its death throes. An active Evangelical Christian, he tried out early versions of what became the Four-Way TAest with colleagues who belonged to other faith traditions and found that they liked it as well, which is not surprising since, as you are about to see, it overlaps with other key ethical principles like the Golden Rule, a version of which exists in just about every major global faith tradition. In 1942, Taylor transferred his copyright for the test to Rotary International. Since then, it has become the set of core ethical guidelines that Rotarians address in some form at all meetings and is supposed to guide everything local clubs do. 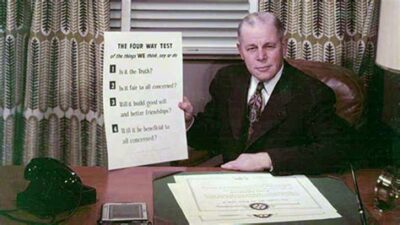 Like the Golden Rule, the Four-Way test is deceptively simple.

The Four-Way Test is a nonpartisan and nonsectarian ethical guide for Rotarians to use for their personal and professional relationships.?

How It Could Change the World, Part 1

The Four-Way test is powerful in part because it seems so simple which Taylor and its other creators reinforced by choosing to capitalize its five key terms which Rotary continues to do whenever it includes the test in its communications.

But as you proceed from the first to the fourth question, you find that each “test” is harder to “pass.” At the same time, the questions also take one beyond the ethical issues Taylor and his colleagues started with toward a set of guidelines that lead to what we peacebuilders call an effective “theory of change.”

In other words, as is the case with other powerful but seemingly simple ethical guidelines I’ve worked with over the years, the power appears when you dig into those terms and some of that apparent simplicity evaporates.

Since I’m new to Rotary, I don’t know how deeply the Rotarians I haven’t met use these principles in determining what they do. What I do know is that these principles are deeply rooted in the organization’s DNA, including among my fellow Rotarians with whom I do not agree politically. They give us both a tool for both determining what we could and should do together and pointing us in directions where we can find more common ground.

They make it possible for us to work together for a shared version of the common good and a better future, because prioritizing those five key terms orients (another term we used in Beyond War) us toward actions that address systemic racism, the fact that the public health crises of the last years have taken a disproportionate toll on the poor and people of color all over the world,  the toll violent conflict takes wherever it breaks out, and more.

In other words, the test can propel Rotarians more squarely into movements for social change to which they would add a lot precisely because most of them come from conventional, mainstream backgrounds through which they have achieved more than a modicum of professional success. I’m pretty sure that most Rotarians did not join the organization because they wanted to change the world. However, the Four-Way Test does given them a way to engage constructively with the problems facing the United States and, for that matter, the entire world.

How It Could Change the World, Part 2

Most of us do not belong to Rotary which, after all, only has about 1.4 million members worldwide.

Nonetheless, we can all use a version of the Four-Way Test in determining what we do in those areas of our own lives that impact other people.

Which, of course, is pretty much everything.

Your circumstances and your life are different from mine, so I won’t even try to go down that route. And, I suspect the details of my life would bore you to tears. So, let me suggest the parts of my life in which I’m applying the test:

Let me be clear.

I’m not saying that the Four-Way Test alone will change the world. My internal radical activist self keeps reminding me that Rotary and organizations like it aren’t going to be in the lead  when It comes to making demands for redistributing wealth and power.

After all, Rotary itself has often been behind the curve when it comes to. admitting women and people of color creating what we would take call a culture of inclusion. Furthermore, Rotary members are, almost by definition, part of that hard-to-define establishment.

Still, I’ve been struck by the honesty with which the Rotarians I’ve met a considering the test’s social and economic implications today. And, by using the Four-Way Test, Rotarians  can play an even greater role than they have in efforts to produce paradigm-shift like changes by working within existing institutions and drawing on the social capital that comes from enjoying the personal and professional successes they have achieved. So, too, can the rest of us.

In short, no one is going to confuse Rotary members with revolutionaries. Nonetheless, by pursuing initiatives that build off of the truths of our social needs, foster friendships and relationship building writ large, and lead to win-win outcomes, they can do even more than they already do to changing the world.