Where People Solve Their Conflicts:
Connecting People to Build a Movement

Last week, the Alliance for Peacebuilding, George Mason University’s School of Conflict Analysis and Resolution, and Rowman and Littlefield publishers convened a workshop whose goal was to expand the way(s) conflict resolution skills can be used to address our country’s pressing social, political, economic, and environmental needs. After two days, we ended up with the followoing interconnected steps that could lead to the creation and growth of a new kind of social/political movement through which constructive ways of solving conflict in our daily lives could lead to constructive ways of solving the problems that so deeply divide us nationally.

All work on the assumption that people actually handle a lot of their conflict reasonably well without thinking of themselves as conflict resolution professionals or peacebuilders. Therefore, our challenge is to expand the use of those skills and, more importantly, forge a movement that converts community problem solving into changes in the way(s) we make political and other decisions at the national level.

In short, we asked people to come to a conference on where people take their conflict. It ended up being on on where people already solve them. That subtle difference tells it all.

We began the workshop by exploring initiatives attendees were already involved in on campuses, in neighborhoods, at the work place, and beyond. Those brief presentations led us to discuss hundreds of other initiatives we knew of.

We also realized that few of the people involved have formal conflict resolution training or define themselves as peacebuilders. Yet, as my friend Liz Hume puts it, they get stuff done (actually, Liz used a four letter word also beginning with “s” instead of “stuff”).

As many of us also realized, those initiatives largely exist in isolation. They don’t get much publicity. They aren’t serving as prototypes that could be adapted for use elsewhere.

To repeat a line I must have heard dozens of time, we have to take them to scale. They have to become the norm and become the way(s) we turn to when we deal with any conflict at any level.

The local can be national

The entire workshop was based on the assumption that we can take what works locally can also work nationally. We decided not to invite Convergence Policy, or any of the other groups that are working on consensus policy making at the national level.

In retrospect, that was probably a mistake. These groups have demonstrated that it is possible to reach wide-ranging agreements across ideological lines even on the most divisive issues facing the country today. We decided to focus, instead, on grass roots initiatives on the assumption that policy makers will only change in response to demonstrated pressure from their constituents.

Needless to say, we will begin building those bridges.

Make everyone a peacebuilder. 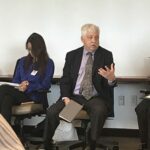 As impressive as those local efforts are, we need a lot more of them. Moreover, if people involved in them get the kind of training we who attended the workshop have, they would be all the more effective.

In fact, we kicked around a bunch of initiatives which we will pursue, three of which are worth mentioning here.

Few of us thought of ourselves as political movement activists—despite the fact that many of us were involved in the protest movements of earlier generations. Nonetheless, we all realized that isolated initiatives are never going to be enough. As Peter Woodrow (who helped facilitate the meeting) and Diana Chigas argue in their book, Adding Up to Peace (which you an download for free), those initiatives have to be focused and turned into demand for social change at the state and national levels. In addition to the initiatives mentioned in the previous section, we plan to:

Half of the people in the room were under 35. Those of us who organized the event understood from the outset that the time has come for the next generations to take leadership roles in biuldinga more peaceful America.

The young people reminded us of an uncomfortable reality. We are providing them with training in conflict resolution skills, but there are nowhere near enough jobs for them. The jobs that do exist do not pay all that well, which led one young woman to point out to me that she would have a hard time paying the tuition at a place like George Mason, let alone my beloved Oberlin.

I was in what may turn out to be the most important of our working groups. We were initially given the challenge of figuring out how the peacebuilding community could come to reflect the overall American population. While we all obviously would like that to be the case, we also realized that we cannot create that kind of movement until the people we are trying to reach—young people, conservatives, people of color, and so on—take us seriously.

To be sure, that involves developing solid, evidence-based, intellectual arguments. Even more importantly, we have to be genuine. We have to reflect our values. In particular, we have to show the people we are trying to reach—many of whom we disagree with—that we treat them with dignity and respect.

Alas, all too often, we fail to do so.

We will spend the summer making plans along each of these lines. If you are interested in finding out more, let me know at chip@charleshauss.info