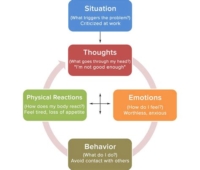 This will be the first of two blog posts inspired by Christophe Blattman’s powerful new book, Why We Fight.

Neither post is meant to be a review of the book which is one of the most powerful books on conflict I’ve ever read. It’s so good, in fact, that I both learned a lot about a subject I’ve been studying for half a century and gave me some hope that academics can tackle the “big issues” rather than remain mired in their internal disputes.

Instead, I want to take on the two issues he raised that got me thinking the most about my own work—cognitive behavioral therapy and related tools here and design thinking next time.

I have been aware of two windows on the role psychotherapy can play in peacebuilding for quite some time. One of my undergraduate political science advisors encouraged me to see how some of inner and often unspoken assumptions and characteristics shapes our behavior, including when it comes to questions of war and peace. I’ve also been a “consumer” of  psychotherapy at various points in my life, including the last decade in which I spend an hour a week with an amazing doctor who has helped me deal with a whole host of issues in part using cognitive behavioral therapy.

That said, I did not explicitly explore the links between what therapists deal with and my professional preoccupation with peacebuilding until my doctor “invited” me to explore cognitive behavioral therapy (CBT). I learned that it is a widely used and empirically validated set of tools originally created by Dr. Aaron Beck who died late last year at age 100.

Neither Beck nor the therapists who have used it over the last fifty years or so see it as a cure-all as you can see on the Beck Institute’s web site. Rather, it is designed “merely” to spur new kinds of behavioral responses to “triggering” situations and do so fairly quickly.

It is one way to break less-than-constructive habits ranging from the kinds of anxiety and other disorders that led Beck to CBT to the kind of dysfunctional political discourse we Americans just suffered through in what have turned out to be relatively inconclusive mid-term elections which left us pretty much stuck in the same familiar rut.

CBT is not an alternative to long-term therapeutic care because it does not necessarily take the patient all the way back to family or origin and other major factors that shape our personality. By that same token, it will not solve the social, economic, political, racial, and environmental problems that ail us as a society.

Instead, it can create the space in which we can make progress toward solving those larger problems. To use language we Peacebuilders (but not many physicians) use, its theory of change holds that if we change the way we make sense of what happens to us (cognition), we can change what we do (behavior) for the better, however we choose to define better.

Again, while it was designed for depression, anxiety, and other individual disorders, there is no reason why its key principles can’t be applied to interpersonal conflict, too. Typically, a therapist works with a patient to identify and redefine how he or she responds to a potentially traumatic and/or disturbing event by:

The  final four bullet points are the key because they define a simple bottom line that can be easy to see although executing it is rarely all that easy. The therapist’s goal is to help the patient decouple our behavior from the all but automatic assumptions that seem to lock us into certain patterns. CBT does not addressed what we colloquially call those parts of human nature that are “hard wired” into us. Rather, it helps us see that we have more options available to us than we might have otherwise thought.

CBT is also useful because Beck and its other developers understood that lasting behavioral change does not come in one fell swoop through some epiphany that happens while we sit on our therapist’s couch. It takes time and practice. That’s true of any skill, whether it’s learning to hit a baseball to the opposite field or find new ways of dealing with “triggering’ events that “push our buttons.” As you can see in this list of key concepts, CBT is skills-based, which means that one can get better through practice. 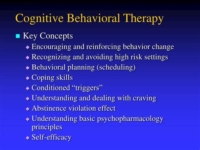 Although my therapist would undoubtedly shudder if she were to read these words, you can actually get some insights into what CBT offers on your own. I definitely don’t mean that you can do therapy on your own. Quite the opposite. Years of experience have shown me the irreplaceable value of work with a trained therapist whom you know and trust.

Still, take a situation in which you are less than proud of your own reaction. What triggered you? What were your automatic thoughts about that situation? And everything else that comes to mind? What evidence do you have that the assumptions underlying those (presumably pessimistic) thoughts are accurate? What would you rather see happen? What evidence can you come up with that you could make progress toward that goal? What could you actually do in the here and now to take steps in that direction?

I first encountered CBT at about the same time that I did a deep dive into Daniel Kahneman and Adam Tversky’s ideas about what they called System 1 v. System 2 thinking. Put simply, we rarely engage in the kind of deliberative thought processes in which we consciously mull what we are going to do (their System 2). Far more often—perhaps 95% of the time—we act without a lot of conscious thought. As Charles Duhigg put it in a book I read at about the same time, we tend to default to what he called the “power of habit.”

CBT offers us a way to take some of things we do that have roots in System 1 and turn them into System 2 events in which we can develop what psychologists call agency and actually see that we have choices that we can make about things, like habits, that typically take for granted.

While it has most frequently been used for dealing with anxiety, depression, and other individual level disorders as you can see in this chart, Blattman and a handful of others are beginning to explore how it can help wean us away from a number of our socially “bad habits,” including conflict avoidance, our reliance on force and violence, and more.

Blattman has broadened my thinking to realize that CBT has potential uses for social and political conflict, too.

To see that return to a simplified version of the bullets I used a few paragraphs ago and put them in the context of American politics as we come out of the 2022 midterm elections, which mostly seem to have reinforced the fact that we are pretty much stuck in a self-destructive rut.

Thus, as this final chart suggests, CBT stars with our problems, focuses on the link between the feeling, thoughts, and emotions they engender, and guides the  patient or client to take previously unthought of steps that help solve the problem.

Where to Go From Here?

One of the great things about Blattman’s book is that he identifies community organizers who have experimented with CBT-like tools in Liberia, Chicago, and beyond. At its core, CBT is designed to work with individuals. Still, as he shows with his handful of examples, if clusters of people do something akin to CBT together around common social problems rather than individual disorders, it could help because, as the last chart also suggests, it does lend itself to collaborative solutions.

As I suggested at the beginning of this post, CBT is neither an alternative to long term psychoanalysis nor a way of redefining human nature. As this generation of evolutionary biologists and psychologists have shown, much of our aggression is at least the product of hundreds of thousands of years of evolution. Some of it may even be part of the way our minds and bodies are physically wired.

Still, there is reason to believe that tools like CBT can not only make us better individuals but can improve the way we organize ourselves socially. Blattman helps here, too. He combines some of this discussion of CBT with an appreciation for the work of Norbert Elias, whose work on what he called the “civilizing process” through which humans have learned to settle their disputes in a more constructive and less violent ways over the last thousand years or so.

In the here and now of the United States in the 2020s, CBT could well become a useful tool for us to use in breaking ourselves of some destructive habits by making it easier for us to see that we have more plausible options than we are inclined to think when we watch stories about the people we disagree with cross our screens.

I often joke that I have been politically clinically depressed much of the time in recent years. If CBT could help me get past some of my personal demons, maybe it can help us get beyond some of our social ones, too.

One caveat. I know that CBT alone is not going to be enough in any of its forms or in any of its applications. As much as I come to rely on it, it didn’t keep me from falling into my old patterns in which triggering events led to automatic thoughts that kept me from seeing constructive alternatives and that led me to lose my temper twice in the last week in ways that I definitely am not proud of.