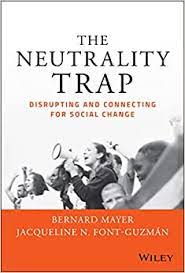 Bernard Mayer and Jacqueline Font-Guzman take on one of the toughest challenges we face today—producing and sustaining large scale social and political change. They bring decades of experience in conflict resolution to the task and do so by redefining their job. Rather than resolving conflict, they talk about their job as conflict interveners who can help us turn social movements and social disruption into lasting change that works for (just about) everybody.

The book navigates the “waters” that often separate conflict resolution professionals from social change activists. It blends their very different experiences as movement activists and conflict professionals on levels that range from the interpersonal to the global system. It is both thought provoking and a joy to read because it combines their own very different personal journeys and slightly edited dialogues between the two of them with the conceptual material that is at the heart of the book.

It comes at a time when many of my colleagues want to focus their efforts on “simply” bringing the left and right together to talk about all of the vexing issues facing the United States. The authors wrote the book to remind us that talking together and building short term or transactional agreements is never enough. And now, we have to take steps beyond our role as neutral, third-side mediators and truly engage in those vexing issues with all of our hearts and souls and with the skills we have developed as conflict interveners over the years.

In all honesty, I should point out that Bernie Mayer has been a close friend since we were housemates at Oberlin in the late 1960s when we (he far more than me) helped organize new left activities on campus.

Personal connections aside, this is one of the best books I’ve read on conflict issues ever.