In writing our introductory textbook, Doug Irvin-Erickson and I have been searching for a state-of-the-art peacebuilding project to feature. It didn’t take us long at least one plausible candidate—the more than decade-long project John Paul Lederach helped organize for the Redding CA based McConnell Foundation.

The project began in 2003 when officials at the McConnell Foundation approached Lederach– one of the few peacebuilding rock stars–about helping their efforts in Nepal where a peace process aimed at ending a decade-long civil war was running out of steam. McConnell had well-established development programs in Nepal but realized that those were doomed to fail unless they added peacebuilding to their mission. It turns out that Lederach had been itching to do a project that could address an entire society and could remain in place for ten years or more, which he thought was the minimum needed for any program in a country like Nepal could bear fruit. Still, he was surprised when the McConnell team agreed to all of his terms, and off they went.

Lederach summed up his work at the 2016 Alliance for Peacebuilding Project. The report, which is filled with his amazing insights and equally amazing photographs. A pdf version of the book is available for a nominal fee at the publisher’s.

The work was by no means an unqualified success. How could any single peace process be in a country as divided and as poor as Nepal. Nonetheless, there were four main features of the project that we could all do well to reflect on and, eventually, emulate.

The first and obvious conclusion is that the length of McConnell’s commitment mattered. Typically, funders will provide a year or two or, if you’re really lucky, three years of support. However, that’s rarely enough to make a lasting dent on a conflict that has taken decades if not longer to take hold.

Ever since we started using the phrase “think globally, act locally” in the 1960s, we have given local peacebuilding pride of place in our work. In theory.

In practice, most of us turn our attention to national decision makers in that work even though we know that such leaders can really be very far out ahead of their constituents. That was particularly true in Nepal where national leaders were neither willing to accept help from outside peacebuilders nor particularly well connected with what people believed or wanted in the countryside where the rebellion was located.

So, Lederach and his team focused not simply on people who directly experienced the conflict in their daily lives. After all, he had been doing things like that in his work for decades. Rather, they focused, first, on disadvantaged parts of the population including women and the poor as well as ethnic minorities. Second and perhaps more importantly, they realized that they had to address underlying cultural norms that shaped those interpersonal relationships if communities were going to change in a lasting way that led to a more peaceful Nepal.

From the beginning the team was committed to more than just its long term commitment to a single country. Among other things, it decided to invest primarily in people and relationships rather than specific projects or outcomes on the assumption that If you don’t get them right and don’t focus on building trust especially with key partners and key people you will want to work with as circumstances improve 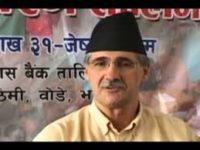 The Kathmandu Valley is about as far as you can get from Silicon Valley on almost every dimension imaginable. Yet, it is no coincidence that the McConnell team’s efforts mirror those of a high tech startup in particular when it talked about the importance of knowing the entire ecosystem they were working in. .

Obviously, this refers to more than just the natural surroundings. In Silicon Valley jargon, a company’s ecosystems includes every individual and organization it has relationships with, including employees, suppliers, customers, and even competitors. For peacebuilders, the ecosystem includes everyone who is touched by a dispute which, in a place like Nepal, means you have to focus on those relationships.

First, do not assume that you—the outside expert—have all the answers about what those relationships are like. Second, the team built on one of the key features of systems theory –put people first. The theory does tend to lead to the kinds of abstract and complicated pictures we saw in Chapter 3. Who you work with and the relationships you create with them matter more than the specific things to you do for reasons that will become clearer as we see more of what the Nepal project team actually did.

As a result, they did not launch right into doing projects. Instead, they took four montohs and carefully created a small advisory team that reflected the diversity of Nepali society, respected each other, and shared an openness to experimenting. Few were part of the national elite other NGOs typically chose to work with. But, all were picked because they exhibited a potential for personal growth. Indeed, by the time the project was over ten years later, all were still active in their grass roots movements, but half of them had also become part of the new political and social elite that was determining the country’s future. 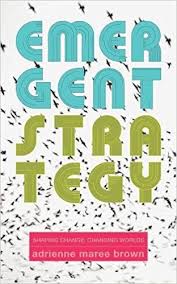 societies and their governments change. Here, too, thinking like a start up helps.

But, so, too, does thinking strategically. Like almost everything else, we have had to rethink what strategic means in today’s rapidly changing world when it is almost never possible to plan out the details of how we can get from “point A” to “point B.”

Instead, Lederach and his team essentially deferred dealing with the “going to scale” questions until they enjoyed some locally based successes. Then they asked how they can make them bigger. That led to a bottom-up strategy in which national leaders were brought in largely after successes had occurred at the grass roots level. Indeed, many grass roots leaders themselves became national level leaders a long the way.

It isn’t just Lederach or Nepal. While (re)familiarizing myself with that project, a friend tole me about Adrienne Marree Brown‘s remarkable book, Emergent Strategy, that talks about how these kinds of issues resonate among people of color and other marginalized people in the United States.

In the end, Nepal remains a troubled country, but Lederach, McConnell, and their Nepalese colleagues sure left their mark.