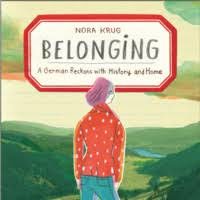 Because I include a chapter on Germany in my comparative politics textbook, I’m always looking for insightful books on the long-term legacy of the Nazi years. So, when I saw a review of Nora Krug’s Belonging (simultaneously published as Heimat in German), I immediately bought it for two reasons.

First, Krug (born 1977) is a generation removed from the Nazi experience. Still, she is obsessed about its impact, especially on her family. Second, Krug teaches illustration at Parsons School of Design, and the reviews said the images were as valuable as the prose. They were right.

Belonging has lots of themes, none of which is more important than the role her uncle Franz-Karl played in her family’s life. Drafted at age 18, he was killed in Italy. To add a curious subplot, his parents had another son after the war, whom the also named Franz-Karl. He, in turn, became Nora’s father some thirty years later. Add to that unlike other authors whose journeys into Germany’s past I have read, this is a book about her grandparent’s generation, including the first Franz-Karl who was a full generation older than the brother he never knew and whose death had made his own birth (and thus Nora’s) possible.

Krug had heard all the statements about the fact that she could not be held responsible for what happened thirty years before her birth, even from her new Jewish relatives. However, she could not escape the sense of shame that lurked just below the surface even after twelve years living in the United States.

So, she began to dig into the lives of her uncle and her maternal grandfather who had served in the army despite being in his early forties Along the way, she learns how historians ply their craft by digging into the archives and talking with amateur historians. Eventually, she gets to meet members of her family who had been estranged for decades.

It is probably not all that surprising that that Krug doesn’t reach closure.

From reading her brother’s school notebooks, she learns that he had been caught up in Nazi rhetoric, once referring to Jews as a kind of poison mushroom. But, she also realizes that he was a teenager who was influenced by the ideas of his day. Besides, he was drafted into the4 army and died before he was twenty. Indeed, it was only in her teens that her family discovered where he had been buried.

She finds it hard to reach closure about her maternal grandfather. On the one hand, he had worked for Jews before the Nazis came to power, and one of his employees seemed to have gotten him started as a driving instructor. On the other hand, not only had he served in the army as a driver, but he had joined the Nazi party. As a result, he was forced to explain himself to the Occupation authorities after the war, which led Krug to a detailed set of documents that ultimately got him reclassified as the lowest/least culpable party member which allowed him to resume at least part of his tattered life.

They seem simply to have gone along.

Perhaps that what she should have expected to find.

Perhaps that is also what today’s students–who are another generation further removed from the Holocaust–should learn as well.