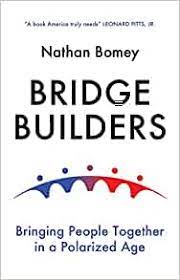 Nathan Bomey’s Bridge Builders is one of a number of excellent new books on conflict resolution in peacebuilding in the United States and elsewhere that have been published in recent months. Bomey’s grows out of his reporting for USA Today during the Trump years and takes off from the fact that the United States is a deeply divided country.

You didn’t need me to tell you that. What makes Bomey’s book so useful is the fact that he tells the stories of dozens of organizations and individuals who are trying to build bridges across ideological and other divisions. His reasons for writing are clear: if we don’t change first, our leaders won’t follow.

What’s remarkable about this book is that I didn’t know about most of the examples he draws on, which is surprising given the number of years I’ve spent working in the peacebuilding space. Some, like Braver Angels, are well known. Most, however, like Coming to the Table or the Iraqi American Reconciliation Project or the Daily Yonder are not. All are grassroots based which reflects his (and my) bias toward bottom up initiatives.

This is a wonderful book that everyone who is interested in either peacebuilding or the state of American democracy should read.