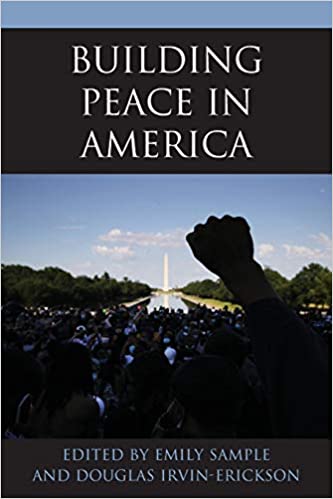 I made an exception here because this is a different kind of anthology.

Building Peace in America grows out of a conference I attended and helped organize in 2018 along with the editors of this book, Emily Sample and Doug Irvin-Erickson. Emily and Doug had done almost all of their work abroad, but we met just as they and I were laying plans for bringing what we’d learned to the US. So, they invited about fifty peacebuilders to a weekend working retreat at George Mason University’s Point of View Center.

We asked some of the usual suspects from the major global peacebuilding NGOs, including the Alliance for Peacebuilding and Peace Direct. We also invited activists and scholars who worked on race, gender, and other issues that were already roiling the United States, whether they called themselves peacebuilders or not.

Even before the conference itself ended, we realized that we had to bring those two groups together to explore peacebuilding in the US together. This book was the result.

Then, of course, came the pandemic, the recession, the killing of George Floyd, and the daily heightening stakes of the 2020 election.

I first read the book in draft form, since I edit the series at Rowman and Littlefield of which it is a part. I went back and reread it when the book came out. I was amazed at how perceptive the authors were and how clearly they anticipated the kinds of troubles we find ourselves in today.

And, we realized that we need to update this book ASAP.