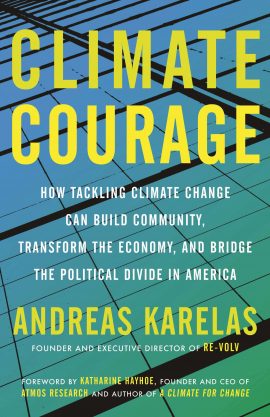 My thinking about climate change changed (pun intended) when I read this book by Andreas Karelas and others by Katharine Hayhoe and Saul Griffith just before the start of  COP 29 Glasgow. Unlike most climate activists who still focus on what is wrong with current policies (of which there is plenty) and on the huge challenge facing us (which is, indeed, huge), these authors focus on the constructive things that are already happening, focusing in Karelas’ case, initiatives that could easily be taken to scale.

In his case, that starts with a fact that many readers will find surprising which is powerful enough to be worth quoting at some length:

The secret is this: we are rapidly moving toward a zero emission, renewable energy-based economy that will dramatically improve our lives, our communities, and our society. And it’s happening faster than most people think.

Karelas is no climate change denier. Quite the opposite. He is the founder and CEO of Re-Volv which loans money to nonprofits in underserved community that want to go solar.

As he sees it, the economic realities are changing so fast that we will be able to meet all of our energy needs using electricity from solar, wind, and other renewable sources by the end of this decade. The energy will be so cheap and will produce so many new and sustainable jobs that we will all be better off–and by a lot.

Don’t get me (or Karelas) wrong.

It’s by no means a done deal.

We have to find ways of engaging people around community based projects that make a difference on climate and other issues, like the work he is himself doing with Re-Volv. In so doing, he draws on ideas I have long emphasized including Daniel Goleman’s (and others’) notions of emotional intelligence or the Heath brothers’ emphasis on bright spots or the successful initiatives that exist in even the most dysfunctional systems.

Such initiative can be taken to scale because they will help people see something that was rarely evident in Glasgow or anywhere else in the climate change movement–we can take action that makes a difference.

Like Hayhoe, Karelas is also convinced that we can broaden the climate change coalition by building on local initiatives that, say, help people see the importance of the water supply in conservative communities like Lubbock Texas where Hayhoe lives and teaches. Indeeds, he cites the example of Georgetown Texas, which may be the reddest town in the reddest county in the country which was also the first city to go totally renewable because it made economic sense, whatever the local leaders’ ideological proclivities.

He is convinced, too, that the transition will produce millions of needed jobs in places like Appalachia or rural Texas which so sorely need them and where resentment toward coastal elites (like me) help fuel (pun intended again) the rightward stampede in so many red states. It shouldn’t just appeal to the religious right and others who have formed the Trump coalition. Re-Volv, for example, works with Black churches and Muslim communities, too, whose communities stand to benefit from the transition to renewables.

There are plenty of obstacles. The fossil fuel companies still get huge subsidies–perhaps as much as the US spends on defense each year–and most of them are fighting climate change policies tooth and nail. Similarly, we will have to rebuild and expand our electrical infrastructure so that, for example, we can sell surplus energy from our home solar panels to the utility companies, which many of them have also historically resisted. To be fair, Dominion Energy (which services Northern Virginia) already supplies my home with renewably generated electricity and has introduced a system through which residential customers with solar panels can feed electricity back into the grid and be compensated for it.

Like Karelas, I know we are in for a long and tough slog. And, we may not do enough to avoid some of the damage the scientists predict or alleviate all of the suffering that is already occurring. However, Karelas and the others are giving us what I pompously called a “rational basis for hope” in the first first academic article I wrote on peacebuilding in the 1980s.

In that light, it is perhaps best to end with another statement which appears near the beginning of the final chapter of his book:

When small groups come together at the community level, we can make changes that yield real benefits, which create new stories, which start trends, which shift popualr opinion, which alters how the government and industrial operate.