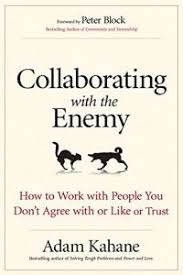 Collaborating With The Enemy

I’ve been a fan of Adam Kahane’s work for years, but I only met him a few days ago. It was my loss, because his work brilliantly takes mainstream peacebuilders out of their comfort zones in constructive ways.

In his most recent book, that starts with the title–Collaborating with the enemy–and subtitle–how to work with people you don’t agree with.or like or trust.

Collaborating with the enemy tends to put us off because it conveys the image of people who overtly or covertly gave support to the Nazis during World War II and others of that ilk. However, the term has another and more positive meaning in which working with our adversaries is not only a good thing, but an inescapable thing. Indeed, those are the situations that we peacebuilders typically find ourselves in.

If we are going to succeed in helping others–not to mention ourselves–deal with people we disagree with, dislike, and don’t trust, Kahane’s most recent book i sa great place to start.

Early on, he makes the case that today’s circumstances make seeking collaborative solutions more necessary but also more difficult to achieve given everything from the accelerating rate of change to our tendency to engage in what he calls the enemyfying syndrome in which we tend to demonize out adversaries.

Collaboration is not our only option. But, in a world of wicked problems in which there is no single, obvious path forward, collaboration is only one of several options. It is, however, the only path to follow if you want to (in his terms) generate creative responses to those problems which we share in common with each other. To see what he means by stretch collaboration in any detail, you will have to read the book. But, essentially, he argues that we have embrace both the conflict we are in and the connections we can build with the people we disagree with.

In fact, Kahane and his Reos Partners have spent the last twenty years doing just that in settings as different as the slums of Haiti and glamorous corporate boardroom.

He is best known for his work using scenarios, which you will find featured here. However, he goes much farther especially by encouraging us to consider using both traditional forms of what he calls vertical power “over” others with the kind of love or cooperative problem solving (horizontal in his terms) that we peacebuiilders are more comfortable with.

Kahane is also an excellent writer who occasionally slips in some  self-deprecating humor.

Like all of his book, a must read for serious peacebuilders who are frustrated by our lack of progress.