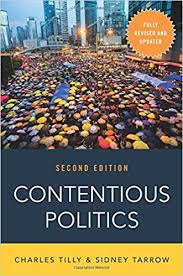 The authors of this book have a special place in my professional life. Chuck Tilly was one of the two professors who did the most to guide me through graduate school. In fact, each time we saw each other until his death, we resumed a rewarding but heated discussion about how much (or little from Chuck’s side) we could accomplish using nonviolent protest movements. I also have spent a lot of time reading Sid Tarrow’s work on Italian politics and saw him again recently at a rewarding but heated conference on the dangers facing American democracy.

In short, I was predisposed to like this book, and I wasn’t disappointed. In fact, it is a book that all of my peacebuilding friends should take the time to read.

A good bit of it deals with definitional and conceptual issues of primary interest to academics which I will largely avoid here. Instead, as they less than elegantly put it near the beginning of the book, contentious politics involves

Interactions in which actors make claims on other actors’ interests

And that is what peacebuilders and other activists do all the time although we rarely conceive of our work in those terms. The value of their work lies in the two main areas they focus on.

First are the actions of and choices made by the contending groups themselves. Whether we are comfortable with statement like this or not, peacebuilders invariably want policy makers and others to change their values and behaviors. In other words, we make claims against their interests. The real value of this part of the book is its attention to  how those choices get made and, with luck, grow, which in their terms reflects three main traits that not all contending groups share which they document in cases from around the world:

Second, they force us to realize that what peacebuilders and other contending groups do does not occur in a vacuum. In particular, what they do is also a function of the nature of the “targets” they are trying to influence. In particular, that involves how the state reacts to contending groups and how that, in turn, shapes what they do. Again, three of there insights are of value to peacebuilders:

As my own work has transitioned from political science into peacebuilding, it has become clear to me that my new colleagues could learn a lot from my academic mentors. Peacebuilders have done tremendous and effective work in conflict zones around the world. However, rarely have we been able to do something that Tilly and Gamson talk about, which is to take our work to scale at a national let alone a global level for two reasons that reflect the key themes raised above.