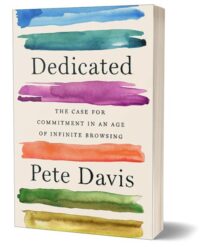 Pete Davis is a remarkable young activist and leader who, ironically, only lives a mile or two away from me, though I hadn’t heard of him until I picked up Dedicated on the advice of a mutual friend. We plan to meet as soon as he finishes a documentary film on Robert Putnam who, equally ironically, has been a friend since I took a course from him when I was in graduate school.

Davis’s main audience are young people like himself who are in their twenties and thirties and struggling to make commitments at work, to potential partners, in political life, and more. If he’s right, today’s young adults have grown up scrolling (which he calls infinite browsing mode) through a much larger number of options than my generation had in the 1960s and 1970s. It has its benefits, including dramatically adding to the options we have to choose from.

But it also makes it easier for us to not make choices and commitments. But we often have so many choices that we end up paralyzed. We end up isolated, anomic, unable to derive the benefits that deep commitments can bring, and worse.

Dedication, by contrast, involves making deep voluntary commitments to institutions and causes we believe in. IF he’s right, young people are waiting for the “great moment” to come along and drag them into commitments. When it happens, dedication produces what David calls “long haul heroes” who commit themselves to the mundane work that movement building requires and know that they won’t see the fruits of their labor for a long time.

There are two ways in which I think Davis overstates his case. First, he is too kind to his parents’ (and my) generation. Yes, there are plenty of people like me and his mentors who have kept at it for decades; but there are also plenty more who have fallen by the wayside, including people of my generation who fit the infinite browsing model as we as his archetypical young adult. Second, I was inspired to create what I’m calling the Connecting the Dots Community because I was meeting so many young people who have become dedicated activists and are almost certainly going to become long term heroes themselves.

That quibble aside, this is a thoughtful and enjoyable book (even if the references to Falls Church VA don’t mean anything to you) that any activist and activist wannabe can benefit from.