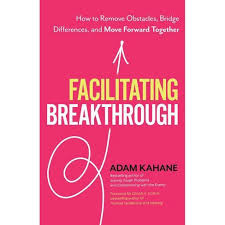 Adam Kahane began his career as a member of the legendary scenario development team at Shell. In the early 1990s, he and other Shell employees facilitated a workshop that went a long way toward changing the way the transition away from apartheid in South Africa unfolded and also convinced Kahane to dedicate this professional life to fostering that kind of transformation in a wide variety of settings though the global firm he create, Reos Partners.

In his most recent book, Kahane explores how people like himself can produce the kind of change that enables one-time adversaries to work together and produce meaningful, lasting, and large scale social change. Anchored in systems and complexity science going all the way back at least to the ideas raised by Kurt Lewin in the 1940s, Facilitating Breakthrough provides dozens of ways in which we can combine top-down and grassroots based approaches to social change because neither approach on its own will work. Kahane comes up with lots of ways that can help people do that, including understanding the context in which people find themselves, committing ourselves to an extended period of time rather than expecting a “quick fix” to our problems,  and more. In fact, Kahane suggests that that there are literally dozens of ways for us to get to the solutions we want as long as those of us who facilitate discussions among the people who disagree with each other are open-minded and flexible enough that we can help others see the world in new and creative ways.

Alas, I can’t find a way of summarizing what Kahane says in more depth without writing a review that would five or six pages long. Rather than doing that, I encourage you to take that amount of time and more to read the book first hand. It is a delightful mix of first hand stories, humility, and conceptual references that anyone who works in the conflict resolution space should read first hand–and not rely on my second person perspective.