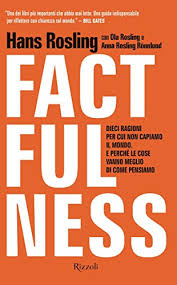 Hans Rosling was a rare human being.

He gave science and data a good name.

Early in his career, he was a self-described grumpy and angry public health doctor who couldn’t get his students or the groups he consulted with to see the realities of life in the Global South that were so different from the Gloom and Doom stories he saw in the news.

Then, he discovered the graphic presentation of data, did a TED talk, caught the eye of self-described data evangelists at Google and the World Bank. The rest, as they say, was history.

The grumpy, cranky scientist started doing engaging, eye opening, mind boggling talks at everything from TED gatherings to Davos to C-Suites. People started paying attention (though few of them did well on the factual tests he gave them).

Toward the end of his life, his son and daughter in law (aka his co-authors) convinced Rosling that he had to turn his data into a book. He died shortly before the three of them finished the manuscript. The two remaining Roslings finished Factfulness, kept it in his voice, and it is now out there for us all to see.

The book starts with a quiz he has given to attendees at his talks, many of whom are development, public health, corporate, and peacebuilding professionals. They do terribly. So do random samples of people from countries around the world.

Rosling seems to take a certain seemingly slightly sadistic delight in pointing out that most supposedly intelligent professionals don’t do as well as chimpanzees would who presumably chose their answers at random.

In fact, Rosling was not interested in embarrassing people who heard his talks—some of whom had paid a lot of money to the Gapminder Institute for the privilege of being told how ignorant they were.

Instead, he wanted to do two things.

First, as he had been doing in his TED talks and videos over the years, he wanted people to realize just how much progress we have made—and just how much progress we still have to make. With his collection of visually appealing bubble charts and his IKEA storage boxes and other props, he shows that we know longer live in a world split between the “west and the rest.” Instead, most people enjoy a standard of living somewhere in the middle. Only a billion of us live in abject poverty or less than $2 a day. About three billion people make between $2 and $8 a day which means that you can buy some food, have access to electricity some of the time, send your kids to school. It’s not much of a life, but it’s better than what people at the bottom have to deal with. Another two billion make between $8 and $32 a day. Still not luxury, but kids can go to high school, routine illnesses don’t bankrupt your family, you have a stove, and more. You may even have a motorcycle. Between one and two billion people are in what we would recognize as the middle class and have cars, extra clothing, cars, and electricity (almost) all the time. More surprisingly yet, something approaching a billion of those people don’t live in the West. They live in the rest.

If I were reviewing this book on Amazon, six stars. If I were still teaching either comparative politics or peacebuilding courses, I’d include Factualness in all of them somehow. It’s that good. And eye opening and mind numbing.