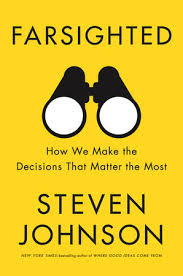 Steven Johnson is one of my favorite writers. Over the years, he has gotten me to rethink paradigm shifts (they happen in a more piecemeal fashion than I used to believe) and evolution (we can plan at some of our mental—if not our physical—evolution as a species). So, I read Farsighted the day it arrived on my Kindle.

This time, Johnson takes on the procedures we use in making momentous decisions. He starts by noting that we tend to think more about the consequences of decisions like the one to kill Osama bin-Laden than about the ways we go about making them. That makes next to no sense in today’s world of complex, wicked problems.

He starts by drawing Nobel Prize winning polymath Herbert Simon’s idea of bounded rationality. Put simply, we can never know enough about any complicated problem to have the kind of full information classical economists assume in rational choice models. So, Johnson asks, what should we do when we have to factor in the effects of dozens of interconnected variables and have lots of holes in what we know about any of them.

So, he lays out tools we can use when we are making momentous decisions about an unknown, unknowable, and constantly changing future. Of course, he is correct in arguing that there is no one-size-fits-all toolbox we can rely on. However, he defines a series of steps that people could and should use, whose absence was clear in the dozens of cases he cites.

In short, a wonderful book by one of the most gifted and insightful writers of our day.