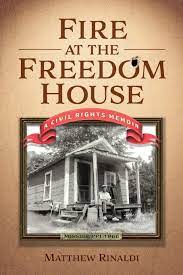 Fire at the Freedom House

Matthew Rinaldi may have been the first person I met at Oberlin other than my roommates. He and one of my best friends from home had spent the summer before our senior year in high school at a program for what we would now call gifted and talented students. Steve had told me about this politically precocious kid from Long Island, and since I was beginning to find my political wings as a more naïve kid from small town Connecticut, I made certain to look him—in fact, I had probably gotten in touch with him before orientation started.

At any rate, Matthew became a friend and mentor as I entered the world of 1960s radicalism. I’m not sure I knew what socialism was at the time, but I certainly was utterly clueless when it came to the variants of democratic and Marxist socialism that he had grown up with. We ended up as leaders of Oberlin’s new left, although he always had a much more prominent role than I did—and deservedly so. We have remained friends ever since as he pursued a career as an activist lawyer while I split my career between activism, academics, and the NGO world.

Matthew entered my life in a new way last few week, when I got a copy of his memoir of his time in the civil rights movement in Mississippi in 1966, Fire at the Freedom House. Rinaldi was part of the last wave of White students to work in the South, first as a member of a group of Oberlin students and then as an organizer for the Mississippi Freedom Democratic Party.

Memoirs like Rinaldi’s help readers who don’t remember those days recall just how brave those activists were because their trips were so dangerous. The activists lived under constant threat of physical attack. In Rinaldi’s case, the Oberlin group was fired on by White racists and fired back. Even for those of us who were active at the time have often fallen into the trap of romanticizing the nonviolent nature of the movement and forgetting that activists like Rinaldi and his friends had to make some tough choices indeed.

The book also made me think about some of the issues we still face today. For example, although he only gives it passing attention, it is clear that many of the people involved in the movement suffered from PTSD and faced a lack of social and psychological support. Similarly, for readers interested in conflict resolution, Rinaldi and his colleagues did an outstanding job of letting the members of the local community shape the movement because they knew their community far better than any outside (let alone a college student from New York) ever would.

In short, like any terrific memoir, this is a book everyone can learn from, whether they grew up with Matthew  Rinaldi in their lives or not.