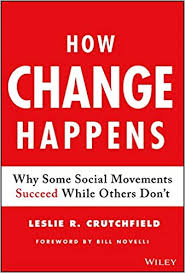 I have been studying and participating in social movement since I was in high school. I’m pretty sure that How Change Happens is the first book I’ve read on the subject written by someone in a business school.

In fact, as Leslie Crutchfield suggests, my assumption that movements have to grow out of protests was mistaken. Instead, she suggests that movement come in a wide variety of forms, and some that are not based in anger and frustration, alone, may be critical for the times we live in today.

Furthermore, Crutchfield and her team considered movement that she and I don’t agree with–like the NRA–in building an argument about how change happens. That, too, is long overdue.

In fact, she covers fourteen movements ranging from political ones like the ones I’ve been involved in to seemingly apolitical ones like efforts to combat a wide variety of diseases. Her conclusions mesh with the ideas a group of us are coming up with as we consider building a peacebulding movement in the United States.