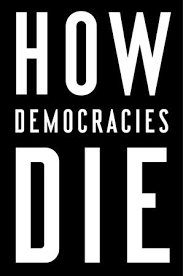 Like most political scientists and many citizens, I’m worried about the state of democracy. It’s not just President Trump. It seems that everywhere you look there is a new populist movement or leaders whose rhetoric and actions seem to be endangering democracy. The alt-right here in the US. Brexit in the UK. Marine LePen in France. Viktor Orban in Hungary. The list goes on and on.

There are now lots of books on the subject, including the recent One Nation After Trump by Ornstein, Mann, and Dionne which I reviewed here a few weeks ago. Now, this book by two Harvard professors puts the threats to American democracy in a comparative perspective for the first time. The authors have wide-experience studying democratization and its failures especially ion Latin America (Levitsky) and Europe (Ziblatt). It is that perspective that they bring to the current situation in the United States.

They are not particularly worried about military coups or outright authoritarian rule. As their previous work on so-called hybrid regimes has shown, democracy can die gradually while at least some of its trappings remain in face. As they put it on p. 5, “democratic backsliding today begins at the ballot box” when what they call the “guardrails” that keep democracy on course begin to give way.

The brilliance (and scary nature) of this book lies in their focus on four factors that they have seen in the “deaths” of other democracies:

They then show how each of these helped destroy democratic regimes in other parts of the world over the last century or so. Although I have not written or taught about all of them, their analysis certainly rings true.

The real value of the book lies in the way they document how each of those factors has come into play with the rise of President Trump and others on the alt-right. I’ll leave it to you to determine just how far we’ve gone on each of these four dimensions.

On balance, however, the lesson is clear. Even if (as I think they do) exaggerate how bad things have become, I agree that our regime is in danger for the first time in my lifetime if not longer.

I will be writing about what we can do to slow down the slide in my blog post for the week of January 21, 2018.

For now, all I can do is recommend that you read this book which is among the scariest I’ve read in years.

Scary because it is on target.