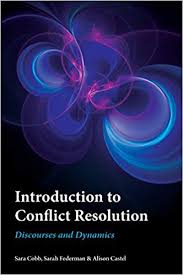 Sara Cobb, Sarah Federman, and Alison Castel’s Introduction to Conflict Resolution is the newest addition to the  Peace and Security in the Twenty-First Century that AfP publishes with Rowman and Littlefield.

When Sara, Sarah, and Alison first approached me about the book, I was skeptical. I’m not a fan of anthologies especially for introductory courses. However, the more I talked with the three of them, I realized not only that such a book made sense and that I should use their breakdown of the field into three epochs as one of the organizational tools for my own book which Rowman and Littlefield will be publishing in the fall.

The three periods are, in fact, critically important ones in the way the field has grown over the last thirty years:

The authors also do a terrific job of showing how the changing  dynamics of those three periods led us to adapt the way we engaged in  peacebuilding work and the kind of linguistic and other frameworks we used in analyzing the world.  As the reader works his or her way through the book, he or she will find us evolve away from the often rational outlooks of scholars who were as different as Roger Fisher or Ted Gurr until we began to focus on identity and other emotionally laden issues and now think in terms of systems dynamics and complexity.

Sara, Sarah, and Alison also chose their articles well. Younger scholars, in particular, will find some the key chestnuts in the literature that may not always be taught today, including the works of John Burton and Johan Galtung. But, they will also find work by political scientists whose writings rarely make it into peace studies curricula, including the aforementioned Ted Gurr and Steven Brams.

Indeed, the book is complete enough that I found myself checking to make certain that I had considered each of the insights they mention while writing my own book.

The authors note that they wrote the book for use in graduate and undergraduate classes. My guess is that it will find its biggest audience in  upper level undergraduate and graduate seminars in which an instructor wants to make certain that students see how the field has evolved.

As someone who has been in the field since their first epoch, I’m delighted to say that this is a book we should all have on our shelves.