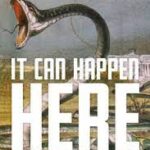 It Can Happen Here

Alex Hinton is one of the world’s leading experts on the causes and consequences of genocide. Having built his career on his expertise on the Cambodian experience, he brings what he has learned to the dangers facing the United States today.

Coincidentally, he found himself testifying in Cambodian courts on cases still being prosecuted as a result of the “killing fields” of the 1970s when Trump was elected and events like the demonstrations in Charlottesville occurred. He thus found it hard not to apply what he had learned abroad to the threats we face in the United States.

He does so in two key ways. First, as the title suggests, he takes the reader back to the threats we faced in the 1930s by evoking the title of Sinclair Lewis’s work from those days. Second and more usefully, he builds the book through discussions of what happened in his own classes at Rutgers University’s Newark Campus in the years from 2017 onward. To be fair, I did not expect to like this literary device, but in the end it was a terrific way to discuss this kind of controversial topic that does not have a single, obvious answer.

Indeed, especially if you are new to genocide studies, Hinton works his way through the conventional wisdom on the causes of this kind of mass atrocity and draws what parallels he can to the current conditions in the United States up to and including the 2020 election. His answer is not definitive because it can’t be.

As a result, his title is well chosen. It  can happen here. It won’t necessarily happen here. And, in his conclusion, Hinton lays out some things we peacebuilders can do to make certain that it does not happen here.

A must read for anyone interested in contemporary American life.