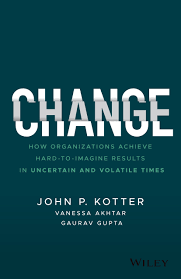 I’ve been a fan of John Kotter for years in particular for his idea that we are in a transitional period in which we are forced to use two different “operating systems” simultaneously–a top-down one that emphasizes hierarchy and a more egalitarian one anchored in networks and systems.

In this most recent book, Kotter and two colleagues from his consulting group take his ideas beyond the business world into the public and nonprofit sectors where I’e done the bulk of my work. They argue that, to some degree, our minds are hard wired to work with both. However, given the uncertainty and interdependence of the world we live in today, it it time to accelerate our use of what they call the thrive rather than the survive channel.

Unlike his other books, this one also goes into the neuroscience behind the two operating systems in ways that peacebuilders should find intriguing.