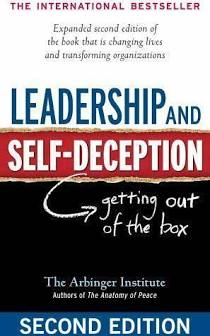 I’ve been a fan of the Arbinger Institute for some time and was surprised to find that I had never reviewed any of its books. Oddly enough, the one start with for peacebuilders is Leadership and Self-Deception rather than The Anatomy of Peace because it does a better job of laying out Arbinger’s key principles.

Arbinger is a leading management consulting firm that doesn’t focus on management. Instead, it argued real change has to be begin with the individual and his or her mindset. That holds for building peace or running a company. And, it starts with exploring the mindset of the individuals who go through its remarkable training sessions.

In many the book itself seems deceptive. It starts and spends most of its time on a parable about a man who is struggling to be a leader and a mentor who helps work through his problems. As the story unfolds, you see that it is “Bud’s” mindset or personal paradigm that keeps him from fulfilling his potential and often leads to failure on the job and in life in general.

That’s what they mean by self-deception which is a byproduct of what they call “the box” in which I see the person I’m dealing with as an object. As a stereotype. As the source of my problems. Real leaders see people “straightforwardly as they are—as people like me who have needs and desires as legitimate as my own” (kindle location 6i38).

Real leadership, conflict resolution, or anything else starts with seeing people as whole people and being curious as to what they are all about. That’s not, however, what most of do most of the time.

An inward mindset that keeps you in their box is one that starts with “me” first. Doing so leads you to the delusion or self [deception that “you” are the cause of the problem and that  the responsibility for doing something about it lies with you. We tend to think—and then act—selfishly committing what Arbinger calls sel-deception and self-betrayal. When both parties in a relationship do that, Arbinger calls it collusion in which blame and shame go back and forth in a vicious cycle. Whether you are talking about an interpersonal relationship or a company or a government, disaster often is the end product.

Arbinger responds by suggesting that one adopts an outward mindset before even thinking about making organizational or behavioral changes in a company. That means going “outside the box” and thinking in terms of the entire relationship which starts with curiosity toward and concern for the other—even when you are in conflict. You invite the other individual or organization into a relationship in which you openly and honestly decide to solve the problem together.

All this is easier said than done. Just think about the implications of all these points for the way I should deal with people I disagree with, including the Trump administration. Can I see my political opponents as whole human beings with whom I have deep disagreements? Can I find the courage to respond to them and our disagreements in a constructive way? Can I take the first step toward healing a broken relationship?

These questions and more are at the heart of Arbinger’s work. And this book is the place to being your personal journey beyond your personal box.