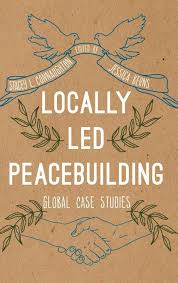 I mostly write reviews of books that my fellow peacebuilders should know about that are written about other subjects. Locally Led Peacebuilding, by contrast is right at the heart of our work.

As I argue in a related blog post, local peacebuilding is all the rage these days.

In the post, I talk about a number of initiatives. Locally Led Peacebuilding, however, is the first major book-length effort to explore the various ways people have tried to put these kinds of projects into practice. The book is, thus, valuable on two levels. First, it provides the most comprehensive look at what is being done and where it is being done. Second, its conceptual chapters explore many—maybe even most—of the issues that focusing on locally led peacebuilding force us to ask.

The scope of the book truly is impressive. Chapters cover the countries around the world where local  peacebuilding efforts have been tried, inclduing Haiti, Guatemala, Colombia, Iraq, Sri Lanka, Liberia, Nigeria, Uganda, Kenya, and Somaliland. Those initiatives run the substantive gamut from narrowly focused projects that deal with faith or community mediation to more comprehensive efforts at system-wide change. There are also chapters on the United States and the United Kingdom, although these are more limited in scope to urban violence (US) and interfaith dialogue (UK).

Conceptually, the book raises most of the issues that strike me as important. Most notably, by drawing our attention beyond the national level elites who make most peace agreements, the book’s conceptual authors suggest that we pay more attention to how conflict is actually experienced at the grass roots level and, more importantly, how local efforts to build trust, equality, and the like can succeed. There even is a somewhat questioning chapter in which Peter Dixon warns us not to ignore national level elites altogether.

There are some topics and questions the book misses. I would, for example, have loved seeing how the Everyday Peace Indicators project would inform and improve these kinds of efforts. Similarly, other than Dixon’s essay, little attention gets paid to how these local efforts can be taken to scale either in terms of sparking society-wide changes in cultural norms or in terms of shifting public policy.

But, that would be asking too much of a single volume in a field in which we just beginning to ask all of these questions.

In short, this is a remarkable book that all peacebuilders will learn from. I know that I did.