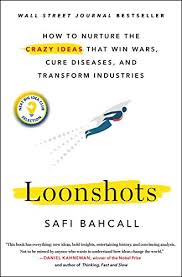 Safi Bahcall is a physicist turned entrepreneur turned observer of how surprising large scale change occurs in international relations, health care, and the corporate world. Emphasis on surprising as should be clear from his title, which he defines as ”neglected projects, widely dismissed, their champions written off as unhinged.”

All involve creating what he calls a phase transition which is best understood as a shift in a substance’s state, as when water boils or freezes. Chemically, it remains the same, but its nature changes dramatically.

Dramatic innovations occur when people figure out how to make phase transitions happen which usually also involves starting with a loonshot idea.

That, in itself, is a remarkable story which Bahcall tells through the history of everything from the Polaroid camera to radar to insulin.

Even more useful for my purposes is his distinction between two types of loonshots which require different skillsets, both of which are relevant to my own work but need to be addressed differently. What he calls P-type loon shots involve building the product itself, for instance, the iPhone. A very different skill set is need for what he calls S-type loonshots in which the s stands for strategy which can roughly be thought of as taking a new product to scale.

In peacebuilding, we need both. Which makes this a remarkably insightful book.

Add to that the fact Loonshots is also a wonderfully written book that if often ironic and, at times, even funny.