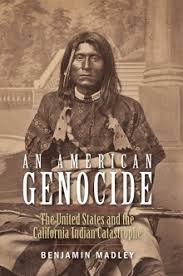 I would never have heard about—let alone read—Benjamin Madley’s American Genocide if I hadn’t been sitting in on Doug Irvin-Erickson’s graduate seminar on engaging with conflict. I’m glad I did, although gladness is not an emotion one would normally associate with this book.

Madley is an historian who teaches at UCLA. His book chronicles the destruction of California’s Native American population between 1846 and 1873, during which time over three fourths of the population died either as a result of violence or disease brought on by the white settler’s genocidal campaign. This book is not for the faint of heart because its author documents what happened virtually attack by attack. None of them were massive atrocities. Normally, victims were killed a handful at a time. Nonetheless, the violence was so widespread that an entire population was destroyed.

In the process, Madley destroys a number of stereotypes. For example, white settlers—not Indians—were known for taking scalps. Similarly, while Indians did resort to violence, it was rarely unprovoked but was almost always a desperate last act by a people who knew their ways of life were about to be destroyed. Last but by no means least, the state authorities and—to a lesser degree—the federal government was complicit in the slaughter. The state government, in particular, funded the militias who carried out most of the attacks, and its debt was eventually assumed by the federal government.

Madley’s book is disturbing, too, because its very title accuses Americans of genocide, a crime we normally only associate with others. To be sure, Madley points out that the word genocide had not been invented at the time. Nonetheless, it is hard to argue that our ancestors should not be held to some sort of account for what can only be called their inhuman and inhumane actions.

One can question, too, how much Americans should feel guilty for what happened more than a century ago. After all, none us were alive. In my case, it would be another half century before my ancestors emigrated to the United States.

Still, when all is said and done, it is hard not to agree with Madley’s overarching point. We Americans will never be able to create a just and fair society that treats everyone with dignity and respect if we do not understand and, then, atone for the crimes against humanity that were committed in our past.

In some ways, that starts with learning from Madley’s own experience. He was born and raised in Redding CA, the site of many of the murders chronicled in the book. In a lot of ways, American Genocide is an attempt to come to grips with the violence that had taken  place in his home town and state.

As a historian, Madley largely leaves the question of what to do about that past up to his readers. Since he will be coming to talk to Doug’s students and others in the final class session, we plan to engage him in a discussion of what we white Americans could and should do to deal with this 150 year old American genocide and with the other crimes against humanity committed by our forebears.