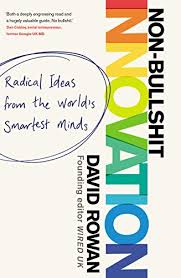 I’ve done a lot of reading about innovation since I was named AfP’s chief (and only) innovation officer a few years ago. Many of the books have been conceptual and sparked a lot of creative thinking on my part. David Rowan’s Non-Bullshit Innovation went a long way toward overcoming my conclusion that a lot of what is called innovation is, well, bullshit.

Too often what is celebrated as innovation inside large organizations in in face “innovation theatre”—a box-ticking, public-relations-led, self-reassuring alternative to radical changes in mindset and culture, just as “security theatre” at the airport does little to increase actual security but does annoy passengers as per the protocol.

In the rest of the book, he talks about dozens of companies that gotten way beyond the BS and produced lasting change that benefited a lot more than just their corporate bottom line. Private businesses in Peru that try to counter the country’s dreadful educational system and make a profit at the same time. Or Australia’s equivalent of our AAA that has pioneered sustainable business practices. Or a Finnish bank that repurposed itself to do health insurance and community development.

Plenty of his examples have little or nothing to do with the kinds of issues I care about. The Arsenal soccer team support network in London. The failure of Google Glass. Even a high end bookstore that repurposed itself to curate bespoke libraries for rich patrons.

Still, even those examples are delightful to learn about and the book is filled with nuggets about what can make innovative and purpose-driven capitalism work for the benefit of us all.