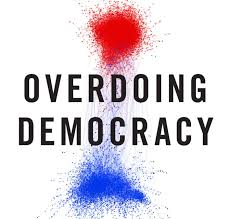 To be honest, I only read Robert Talisse’s book because my friend Julia Roig thought it might be useful for a project she is doing on rethinking American democracy. It is an important book for the times we are in, although I would not have reached the conclusion he did. In essence, he thinks that the polarized nature of our lives today means that we shoiuld

reserve spaces within our social environments for collaborative activities and projects in which politics is simply beside the point.

On one level, I agree with him. We are do divided that there are time when we dread the fact that political discussions can ruin things like family holiday dinners–at least when we can gather for them.

On another level, I disagree. Rather than limit our time discussing politics so that fights don’t break out, it makes more sense to me for us to learn how to disagree better so that our differences not turn into the dinner-table equivalents of World War III.

In other words, rather than limit those discussions (and, hence not overdo democracy), we should learn to value the people we disagree with and learn from our disagreements.

That is easier said than done and beyond the task Talisse set out for himself.

In short, I found this an important and challenging book. While I reach a different conclusion, the argument is empirically sound enough and the book is insightful enough that all of us who care about American democracy should read it.