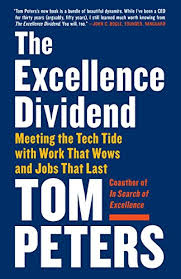 I have been a Tom Peters fan since he published In Search of Excellence in the early 1980s. I didn’t expect I’d read another of his books until I heard part of his interview on 1A. I was in the car, tuned in late, and it took a minute or two before I realized that it was Peters. I realized immediately that he had something powerful to say. When we got home, I downloaded the book and dug right in.

There’s way too much in the book to cover in a short summary/review like this one. Instead, I want to focus on three broad themes which I’ve done without using the often lengthy acronyms Peters likes to include in his books. If you want to see more, Peters has pulled these ideas, the PowerPoint slides he uses for them, and a lot more on his new website—Excellence Now,

First, if you have read his other books, you know about his demand for excellence. Not just from the company or from its employees, but from you. That point have been at the heart of everything I’ve done for the last thirty years. Though I routinely fall far short of excellence, the quest for it still motivates me every day. The same holds for one of his leadership memes—managing by wande

ring around. In fact, I first saw the importance of that in the way my wife dealt with her team of foreign policy analysts. Don’t call them. Don’t summon them to your office. Go see people on their own turf. Show them respect. Show that you care.

Second, that leads to a series of long-time Peters issues that get new and deeper attention here because they are more important in the world and therefore have gotten more of his attention over the years. While his focus is on business, I’m struck by how broadly three of them apply, including in the two fields I work in, political science and peacebuilding:

Third, Peters gives a lot more emphasis than he has to two issues that are near and dear to my heart in ways that few others have stressed: