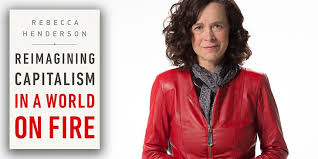 As a product of the new left of the 1960s, I’m still surprised when calls for radical change come from the full professors at the Harvard Business School. Yet, I read them all the time. And this is best of all the books I’ve read because Henderson systematically makes the case for a new kind of capitalism and outlines ways in which it is already being put into practice. Thus, on pp. 15 and 16, she argues that

business has not only the power and the durty to play a huge role in transforming the world but also strong economic incentives to do so. A mere decade ago, the idea that business could help save the world seemed completely crazy. Now, it’s not only plausible but also absolutely necessary.

The rest of the book makes that case both ethically and empirically. It is filled with examples of things that are already being done on climate change, inequality, finance, and more as well as pleas for business leaders to do even more. Must reading for anyone interested in social justice and social change.