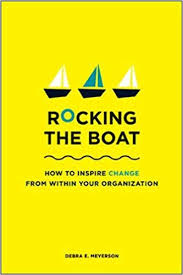 Debra Meyerson was a professor of education and business and Stanford before a stroke first derailed and then redirected her career. Until then, she was best known for her work on tempered radicals who try to change systems by working from within as described in her 2008 book, Rocking the Boat. I found the book useful because it makes three points about men and women who seek profound change by working within existing institutions, in this case major corporations. Three points, in particular, stand out.

It is not easy being a tempered radical. You are constantly torn by the pressure to fit in to your organization and remain true to your values.

But, then, again, it isn’t easy to be a less tempered radical either.