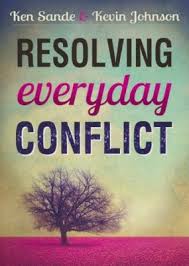 Very few of my colleagues in the world of secular peacebuilding are aware of similar work done by evangelical Christians as a direct outgrowth of their faith. Even fewer know of the fascinating work conducted by Ken Sande and his team, initially at Peacemaker Ministries and now at Relational Wisdom.

Sande’s most recent book written with Kevin Johnson, Resolving Everyday Conflict, is something all of us in the secular peacebuilding world need to read for two reasons. First, it adds new dimensions to the work we’ve already been doing, especially around issues like reconciliation. Second, most of us in both communities tend to sit on different ends of the political spectrum, we might be able to work together and find ways out of the political impasse our country is currently in. Emphasis on might.

Sande’s work is important in its own right. That starts with the fact that he has been what he calls a “full time Christian conciliator” since 1982 which was about the time that the modern secular conflict resolution field was born.

Although they not deal with global or national political issues in this book, Sande and Johnson see conflict as a fact of everyday life. And, their ways of dealing with it overlaps with those my colleagues and I draw on, including:

Evangelical principles actually deepen the importance of reconciliation and related goals to their work. Members of that faith community believe that we are sinners by nature and that one path toward reconciliation with Jesus involves reconciling ourselves with our fellow humans, including—and often especially—those with whom we are in conflict. As they say on pp. 18 and 19, “our sinful nature is really what makes conflict so destructive. Our sinful desires fuel conflict in ways we probably haven’t paused to understand.” Indeed, Sande, Johnson, and others in their world argue that one cannot be a faithful Christian and not deal with conflict along these lines.

Most of the people I work with don’t use words like these from Galatians 6:1: “If someone is caught in a sin, you who are spiritual should restore him gently.” Yet, that is exactly what we secular peacebuilders are talking about.

Finally, that takes me to the second main point I made earlier. We live in a country marked by the deepest polarization I have seen since my own student days during the Vietnam war. Could t secular and Christian peacebuilders (and not just in the evangelical wing of Christianity) could work together to address some of those differences? We don’t have to agree on the issues. Thus, I suspect Sande and I would never see eye to eye on many issues. However, in working with other Evangelicals (I’ve never met Sande or Johnson) I’ve learned that there are plenty of things we agree on—most notably how to disagree with each other with respect. I’m already doing some work with people who rely heavily on Sande’s work and that of experts like him. I expect to do so more and more going forward, since the divisions between left and right only seem likely to get deeper.