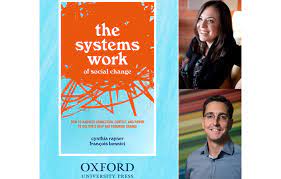 Cynthia Rayner and François Bonnici wrote The Systems Work of Social Change while they worked at the Bertha Center at the University of Cape Town. It is one of the first books to seriously tackle how we an systematically address the wicked problems of today’s complex world and to do so from a perspective that looks primarily “upward” from the Global South.

They work on the assumption that our problems are so deeply engrained in everything from our political and economic institutions to the values and norms of our popular culture that nothing short of a radical transformation in these and other areas will do which is why they emphasize systems work.

If that weren’t enough, the book is filled with remarkable examples ranging from  Dutch visiting nurses to people who organize slum dwellers around the world.

In short, a fascinating book that was fun to read, too.